'I Need Rehab Not Discipline'

Ahmede Jabbar Bradley was fatally shot by an APD officer 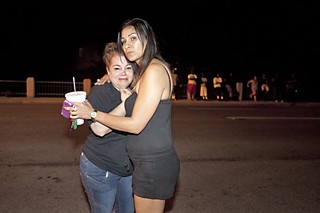 By his own account, Ahmede Jabbar Bradley was a man troubled with drug addiction. "I been smokeing [sic] crack since I was [18]," he wrote in a letter to then-district Judge Wilford Flowers in October 2006. "Texas talks rehab. I need rehab not discipline. I am a habitual drug user your honor." Indeed, at the time Bradley, then 26, wrote that letter, he was facing time for possession of crack cocaine. It was the 19th time he'd been arrested and charged with a crime – including six misdemeanor charges of pot possession, four misdemeanor charges of evading arrest, and a felony charge of possession of crack cocaine that netted him five years in prison, according to court records.

On Thursday evening, April 5, his struggle came to a sad end, after he was shot and killed after fleeing from an Austin Police officer who'd pulled him over for what APD Chief Art Acevedo said Friday was a routine traffic stop in the 6000 block of Manor Road in East Austin. Acevedo would not say what triggered the stop, but said it was a routine stop by Officer Eric Copeland that started out "friendly." Then, however, Bradley, who was alone in the vehicle, pulled away in the car, stopped again a short distance away, got out of the car, and fled on foot.

It was not the first time Bradley had done such a thing: In 2009, police pulled him over after noticing an inspection sticker violation, and smelled marijuana coming from his car; after he initially pulled over, Bradley took off again, abandoned his car in a nearby yard and fled on foot. In that instance, police apprehended him without incident; he was not as lucky on Thursday evening. Copeland followed on foot after Bradley took off, and the two got into two scuffles in the 5000 block of Overbrook Drive. Copeland tried to subdue Bradley with his Taser, but one of the prongs "didn't take," Acevedo said, and the device failed.

As the pair continued to struggle, Acevedo said, Bradley pulled the cord from Copeland's shoulder-mounted mic and tried to strangle the officer with it; Copeland was able to free himself. As the struggle continued, it also escalated; Acevedo said at least two witnesses called 911, asking police to hurry to the scene because it appeared Copeland was losing the fight. Witnesses also reported seeing Copeland and Bradley wrestling for control of Copeland's gun. Ultimately Cope­land regained control and fired several shots, striking and killing Bradley.

The scene of the shooting bristled with tension, witnesses said. At one point someone threw rocks at a patrol car, shattering the driver side window; no one was hurt. Acevedo said there's video and audio of the stop, and recordings of multiple 911 calls describing the scene. He said the department will work to expedite the public release of both audio and video of the incident, and implored the public to withhold judgment until after the evidence is in and the recordings have been made public. "What is most important for us, once we've stabilized the scene, is to investigate, so that we have the evidence" that both a grand jury and the public will need in order to determine whether the shooting was justified.

Among the questions likely to be raised is whether Copeland should have pursued Brad­ley after pulling him over for only a minor traffic violation. The decision to pursue a fleeing suspect when no apparent exigent circumstances were present was among the issues raised in the 2007 shooting of Kevin Brown. Sgt. Michael Olsen was terminated for that deadly encounter, in part, Acevedo concluded, because he failed to properly assess the threat and risk that Brown was armed – Olsen had been told he was carrying a gun – before deciding to go "hands-on" with Brown and then to chase him through a neighboring apartment complex. To what degree Cope­land's tactics and decision to chase Bradley will be an issue in this shooting remains to be seen. Acevedo said the investigation continues and that there's "a lot of other evidence" related to the incident, but he didn't elaborate.

Copeland was taken to the hospital with a broken finger and other minor injuries; he has been placed on administrative leave with pay as the investigation continues. Acevedo extended his sympathy to Bradley's family. "I don't care if the person is Jeffrey Dahmer," he said. "The pain of a mother and father is real."