Point Austin: 'Free' Is Much Too Expensive

The Parking Guru tallies the costs of subsidized parking 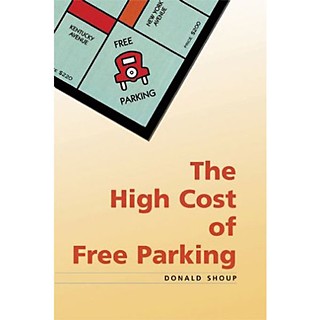 Looking over my recent columns, it seems I haven't really pissed anybody off in a while. I guess it's about time, so here goes:

The city needs to charge more for Down­town parking.

Before you grab your baseball bats, let me say not only will this proclamation annoy many of my friends (and certainly Chron­icle colleagues), it doesn't please me too much, either. Who doesn't want "free" parking? But over time I've come to mistrust the deal we get from "free parking" – like many other public subsidies for motor vehicles – and my thoughts on the matter were mightily confirmed this week by the Austin visit of professor Donald Shoup, author of The High Cost of Free Parking (2005).

Shoup is a professor of urban planning at UCLA (where, he notes, it's hard to ignore the deleterious effects of parking subsidies on the urban landscape), and he's become variously renowned as the Guru of Parking, the Parking Maven, or even (as he was introduced by Council Member Chris Riley Monday night at the Downtown Austin Alli­ance) the Rock Star of Parking. The self-deprecatory professor (he offered "Shoup-Dogg" as an alternative) described his work as simply recognizing a couple of facts about cars long ignored: that they spend 95% of their time at rest in some parking place, and that they therefore indirectly require roughly four parking spaces for each car that exists (one at home, three more at potential destinations).

Giving a sense of what that means in land mass, Shoup calculates (using 2000 census numbers) that should the rest of the world acquire the same vehicle-ownership rate as that of the U.S. (771 vehicles per 1,000 persons) – not even allowing for population increase in the intervening decade – that would mean 4.7 billion vehicles, requiring 19 billion parking spaces. The first number would occupy a space the size of England or Greece, the second, France or Spain – and that's without addressing the questions of fuel, waste, concrete, pollution ... you get the picture.

Can you say "unsustainable"?

But Shoup is no alarmist, and he notes that "technology and policy can change," just as cars replaced the horses that once daily deposited 2.5 million pounds of manure on the streets of New York City. As a speaker, he is both entertaining and extremely persuasive on how the illusion of "free parking" – a term I will never use again without scare quotes – imposes not only "enormous monetary costs" on all of us, but also "many other hidden costs on cities, the economy, and the environment."

Part of that persuasion is simply his use of photographs that reflect the city landscapes blighted by acres of land dedicated to nothing but "free parking," half or more empty much of the time. For his Austin presentations, he juxtaposed an overhead of the UT campus – built-out, sylvan, designed for the use of many thousands of pedestrians – against a few blocks farther south, where acres of mostly empty parking lots surround buildings that (whatever their purposes) look like islands in a sea of asphalt.

"We've learned not to see all this asphalt," he continued. "Yet if aliens were to arrive on the planet, they might well conclude that maybe the real inhabitants of this city are the cars." What's worse, we're all paying – in real money, in lost opportunity costs, and in a host of direct and indirect urban ills – for our ostensibly "free parking."

Shoup's vision of the dystopia created by these unacknowledged public subsidies is stunning, but his policy prescriptions are surprisingly simple: 1) Charge the right "market" price for curb parking (determined by actual demand); 2) dedicate the consequent revenue to the immediate commercial or residential neighborhood (as walkable spaces); and 3) reduce or remove zoning-required, off-street parking minimums as wasteful land uses. Council Member Riley – a Shoup enthusiast who gets around town primarily by bicycle – is on board, and the other members of the council committee who heard Shoup's presentation, Laura Mor­rison and Kathie Tovo, were impressed. But they also were skeptical of the politics of imposing parking costs on, say, Downtown musicians and club staff, even when Shoup argued that paid parking used by customers (and the amenities that would underwrite) would improve everybody's bottom line.

Shoup acknowledged his ideas can't fully work without at least adequate public transportation – a major corollary in Austin – but he insisted, "The idea that the way to help people is by giving them free parking [instead of, say, subsidized transit] is a bankrupt idea." Even on a global scale, he noted the contradiction of "opposing foreign wars for oil but demanding free parking at home." Our blind political-cultural subsidies for vehicle traffic (and land use) simply have to end; we will drive (and park) ourselves into oblivion.

But don't believe me – I'm still bemoaning my deepening understanding that "free-parking" my Honda is henceforth an oxymoron. Watch Shoup's presentation to the council's Comprehensive Planning and Transportation Committee (Channel 6 online). You may come away convinced that "we pay for 'free parking' dearly, in every other aspect of our lives."