Although most of the headline political news in recent weeks has been over primary elections (presidential and state), there's an Austin municipal election next month: the May 12 City Council election – mayor and Places 2, 5, and 6 – for which voter registration ends April 12 and early voting begins April 30. So pay attention: Candidates will be coming to your door hangers, mailboxes, and robo-calls soon.

Indeed, matters began in earnest last week, with the first few endorsement forums organized by political organizations, interest groups, Democratic clubs, neighborhood organizations, and the like. By the time the campaigns conclude on election day, there will have been several dozen of these forums across the city, and they are still the best way for voters to see (and question) the candidates in action. But (as we've reported regularly during previous campaign cycles), the forums and their consequent endorsements can be highly arbitrary in organization, attendance, and outcome – especially when a very few people (quite often mostly the same people) issue their "endorsements" on behalf of "The Redhead­ed Sons of Stephen F. Austin – for Change" quickly followed by similar support issued by "The Democratic Daughters of William Sydney Porter – for Progress" (names disguised to protect the guilty). With that warning, we'll attempt to track and publicize the most prominent endorsements. Here's a small taste of the recent action.

Last week's most prominent and well-attended forum was the big Four Seasons showdown held by the Real Estate Council of Austin, where the table couldn't have been much longer for the 12 attending candidates. Luckily, a couple members of the Place 5 posse chasing Council Member Bill Spelman didn't show, leaving only four challengers and the incumbent in that slot. RECA and its co-sponsoring orgs do not formally endorse candidates, but the forum ended with a "straw poll" tallied as the 500 guests departed (about half voted). This featured one fairly sizable surprise: Place 5 challenger Dominic Chavez outpolled Spelman 46% to 35% (a result prefigured in broad applause for a couple of Chavez's fairly innocuous statements about making City Hall more "accountable" and "business-minded").

In the mayor's race, incumbent Lee Lef­fing­well predictably outpolled former Coun­cil Member Brigid Shea, although the margin (91%-5%) was surprisingly overwhelming, with Shea barely outpolling novice candidate Richard "Clay" Dafoe (4%). Place 2 incumbent Mike Martinez garnered 81% to challenger Laura Pressley's 19%, and incumbent Mayor Pro Tem Sheryl Cole got 90% against challenger Shaun Ireland. Although the poll has no force, it will fuel speculation already buzzing around town that with so many opponents, Spelman likely faces at least a runoff. (The entire straw poll results are available on the RECA website, www.recaonline.com, where you can also find the candidates' responses to the RECA questionnaire.)

Other highlights: Of the Place 5 battle royal, Chavez and entrepreneur Audrey "Tina" Cannon look most likely to give Spelman trouble. Chavez has been politically active in various conservative causes for quite a while (most recently Carole Keeton Strayhorn's Austinites for Action), and he took an aggressive stance on "government accountability" and cutting costs; and Cannon appears to have mastered policy-speak – "we need to grow sensibly and responsibly ... with a multimodal transportation system" – a basic necessity on the campaign trail. (Cannon garnered 18%, third place in the straw poll, Robert "Bo" Prudente took 1%, and the others were invisible.) Spelman was a little abrupt with his answers on questions such as Cannon's to him about whether lawsuits filed against the Council have effectively undermined its fiduciary duty. Responded Spelman: "The right thing to do is still the right thing to do. ... Let them sue us."

There was also some tension in the mayoral exchanges. Leffingwell asked Shea how much money she had made in consulting contracts on city projects since she left the council in 1996. "Less than the mayor makes," she responded, estimating "about $40,000 a year." (See "Shea's Contracts at Issue," April 6.) In turn, Shea asked Leffing­well if he supported her proposed campaign finance reforms, radically limiting donor bundling and requiring full disclosure from anyone with city contracts. The mayor said that while disclosure is most important, he couldn't respond specifically on her reforms without more information. "As for bundling," he said, "all that is is a person who already supports you asks his friends also to support you."

Leffingwell used a question from Dafoe concerning corporate incentives to argue that incentive deals done during his tenure have all been "cash-positive, performance-based, and providing good jobs" for the city, and he struck back specifically on Shea's campaign charge against the fee waivers provided to Congress Avenue Marriott hotel. "Anybody that says [the hotel] was coming here anyway," he said, "doesn't know what they're talking about."

Later, in response to an audience question about excessive regulation potentially hurting local business, Shea raised an issue that may become more important as the race goes on: what she described as "the incredibly ill-advised bio-mass plant" (i.e., Austin Energy's 2008 deal to buy $2.3 billion in power derived from the burning of Northeast Texas waste wood). That council vote was unanimous but rushed and uneasy, and Shea's implication was that it and the whole question of "fuel charges" cannot be ignored in analyzing AE's current rate predicament and the council's ongoing attempts to come up with a solution. (See "Then There's This," April 6.) 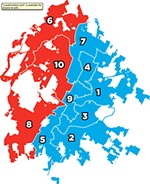