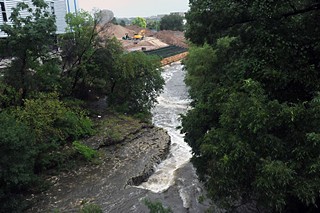 The bulldozer in the distance marks the spot of the planned redevelopment of the Green Water Treatment Plant site along Shoal Creek. (Photo by John Anderson)

City Council's April 5 agenda (only a utility rate work session this week) looks a little less daunting than last week's, although it's sometimes hard to tell whether a potential public donnybrook is hiding in the miscellaneous weeds. Music fans should be glad to know that the art mavens at Capital Area Statues will be donating a bronze sculpture of the Red-Headed Stranger (aka Willie Nelson) for erection at Second and Lavaca (Item 9); nearby, the Green Water Treatment Plant Master Development Agreement (briefed last week) is scheduled for approval (Item 10). Item 15 will schedule some animal politics fireworks, likely for April 26 (to debate the proposed "temporary" move of Austin Pets Alive! into the Town Lake Animal Center). Expect some woofing and hissing in that discussion; see "What APA! Wants, APA! Gets" for more.

There's a large group of zoning cases (Items 66-84), one or two of which threaten storm clouds; if council gets through that gantlet unscathed, the next potential thunder would be Item 88, the "Chapter 26 hearing" that grew out of Parks and Recreation's short-lived plan to move the international hostel from its longtime parkland location on South Lakeshore Boulevard. PARD has since publicly surrendered, so it's possible that controversy has faded. With any luck, council can adjourn within shouting distance of dinner time.

They didn't quite manage that last Thursday, March 22, after nearly three hours of sometimes heated public hearing on the Apple economic development deal. There was some vocal opposition – notably, folks insisting that A) Apple doesn't need the money (undeniable); B) even if the deal meets the city's incentive standards, it's still "corporate welfare"; and C) Apple's foreign suppliers have dismal human and labor rights records. But most witnesses, with some misgivings, supported the deal; in particular, construction workers organized by the Workers Defense Project asked that protections be negotiated on wages, safety, and training. Council members asked, and Apple said yes – pending an actual project-in-progress – and the eventual approval vote was unanimous. Next stop: Commissioners Court, where Travis County will be asked to carry its own Granny $mith$ to Apple.