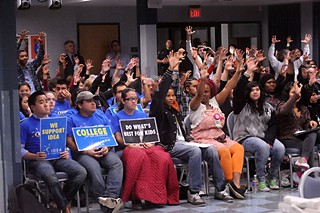 Whenever the Austin Independent School District talks about its alliance with IDEA Public Schools, the chatter is always about expanding the portfolio of options for parents and students. But preliminary numbers suggest that East Austin residents are looking elsewhere in that portfolio, as early enrollment numbers have missed the mark.

While IDEA was originally sold as a way to turn Eastside Memorial High School around, in fact it will not touch the Eastside campus until 2013. Instead, its first boots on the ground will be at Allan Elementary, a campus rated academically acceptable by the Texas Education Agency. This fall it becomes IDEA Allan, where the charter school group will take over kindergarten and the first, second, and sixth grades. IDEA has set itself a target of a minimum of 112 students for each grade. By March 18, it had met only its sixth grade goal: Kindergarten enrollment was at 41% of the target, first grade at 34%, and second grade at 44%. Even the sixth grade enrollment raises some complex additional questions. As of March 9, of 286 eligible rising fifth graders in the Allan attendance zone, only 77 were registered at IDEA Allan; 101 had instead opted out and are heading to Martin Middle School, while another 108 used either open transfer or a diversity choice option to move to another campus.

It's a similar picture in the K-2 student body: Of 166 students eligible in this first round, only 67 are staying at Allan; 49 are moving to Govalle Elementary; 36 to Ortega Elementary; and another 14 opted for different schools. IDEA senior communications manager Vanessa Barry said, "We're not really concerned at this point, just because we know that we've got a lot of time before the school year starts and we're just now getting to the point where we can accept applications from anyone and anywhere."

So with so many students opting out, how is IDEA making up the numbers? By going outside of the Allan attendance zone to aggressively recruit students. Through March 30, AISD will be sending letters to parents at the feeder elementaries for Mar­tin – Allison, Brooke, Govalle, Metz, Ortega, and Zavala – offering their children a place at Allan. After that, AISD and IDEA will recruit districtwide. Barry said, "The intent was to provide East Austin with an opportunity that was different from the other opportunities AISD has." But now that the numbers leave space, "We're reaching out to other schools that may be interested," Barry said.

There remains a fundamental question about the purpose of IDEA Allan. The takeover by the charter group was sold as creating an option for East Austin kids, but by default, Allan students are assigned there unless they opt out. So anyone leaving is sending a clear "no" vote to IDEA and the district. PRIDE of the Eastside is the new group leading the push back against this quasi-privatization of an AISD campus, and its spokesperson Vince Tovar said IDEA's recruitment attempts have been "aggressive to the point of bullying." However, instead of a deluge of students transferring to Allan, the end result has been swelling enrollment at Martin and Govalle. Now IDEA is preparing to recruit outside the Eastside Memorial community, and Tovar said, "If this isn't bought into by the Eastside community, then why have it in the East­side vertical team?"

Originally, AISD gave students only until Feb. 24 to return their opt-out letters, but it then extended the deadline to March 9. "It would have been better for us if it had been February, because that was less time for people to opt out," admitted Barry, but she said IDEA was supportive of the extension. According to AISD Superintendent Meria Carstarphen, the extension was given "in order to alleviate any lingering concerns from other community stakeholders." Barry said, "Whatever made the community happy, we were pleased to do."

Yet the common perception is that it gives IDEA more time to hit its 112-student target, and the recruitment push includes trying to persuade parents who have moved their kids to private or charter schools to enroll them at Allan. In a March 9 statement, Carstarphen said that in addition to getting current AISD students to transfer, "We also look forward to welcoming new students to AISD who may not be in the district's family of schools." IDEA has already launched a TV campaign, showing smiling children in one of its campuses, as a voice claims "we're proving what's possible – that every child can make it to or through a four-year college or university." That and many other claims about IDEA's success rates in the Rio Grande Valley have come under scrutiny and severe criticism (see "Uncontrolled Experiments," Dec. 9, 2011). However, that discussion may be irrelevant after major changes in IDEA's teaching methods. Any measurable results it achieved in the past were under a traditional teaching regimen; IDEA has since shifted to the learning-by-repetition system called direct instruc­tion. Barry said that IDEA "did our best to educate parents on our instruction model." But Tovar argues that its restrictive techniques, with an emphasis on core curriculum and strict lesson plans, are the opposite of what AISD families want. "We're about the whole child," he said, "and IDEA is not." 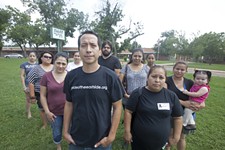