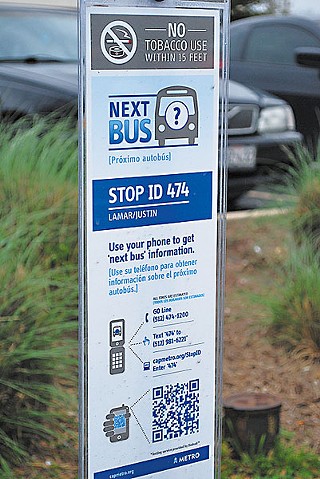 If you're a regular Capital Metro bus rider, chances are you've noticed QR codes steadily replacing regular bus timetables at the city's 2,700 bus stops. Cap Metro is rolling out the signs as a way to efficiently relay detailed information to bus patrons, and the transit agency believes the project will increase its ridership.

"If we're really trying to get more people to try public transportation and trying to create a greener city and to help alleviate our traffic congestion, we can do a better job at the bus stop," Cap Metro communications specialist Erica McKewen said. This phase of the project is only a first step, McKewen added; it lays the foundation to provide real-time bus scheduling information, expected in two years.

The big change from traditional timetables is that riders must have a smartphone (or similar device) in order to use them. Customers scan the code using a QR reader app on their phone or tablet, which leads them to a website that gives arrival times for that specific stop and information for the next stop. If a cell phone is not able to read the code, there are three other ways riders can use phones to get bus information: Riders with Web-enabled phones or tablets can visit www.capmetro.org/stopID#, enter the bus-stop ID, and pull up a website that shows the next bus arrivals; riders with more limited phone functionality can text the ID number to 981-6221 to receive a reply text with the next scheduled bus arrivals at that stop. Finally, riders can call the automated Go Line at 474-1200.

McKewen said the agency will add features as technology becomes available. For example, "When real-time tracking comes online – say the bus is running a minute early or two minutes late – it's going to tell you that."

Before the erection of these new signs, only half of Cap Metro bus stops had any transit info at all. McKewen explained, "If you were at that other 50 percent of our stops, you needed to be really well prepared before you left home." The new signs cost $235,000, received through a federal tobacco cessation advocacy program called Com­mun­ities Putting Prevention To Work – the signs include an anti-smoking warning.

Cap Metro tested the viability of the new signage during last year's South by South­west. "The response from South by Southwest ... prompted us to really move forward with it on a grander scale," McKewen said. There has been some skepticism, however, out of concern for people who rely on public transportation but have limited cell phone use or none at all. "Not everyone will have this device, or the model to read the electronic signs," said Bus Riders Union of Austin spokesperson Robin Orlowski.

In a 2010 survey of Cap Metro customers on regular routes, riders expressed dissatisfaction with both the Go Line and the difficulty of using the maps and timetables. Most regular bus customers are "riders of necessity," and typically have a lower income than express or UT-shuttle riders; they are definitely not the typical SXSW Festival attendee. Orlowski said, "We're the capital city, and this is public transit – it needs to be accessible to the public, not just someone who can afford to have a cell phone."

McKewen responded that the same survey showed 80% of riders carry at least a cell phone and will be able to use the signs – though how many have smartphones is unclear. Those without phones, McKewen said, can either pick up free route brochures on the bus or choose to buy the complete timetable for $3. McKewen said, "All of the maps ... are online, so you can do all of your planning at home or at the library before you need to ride."

"It'll take a while to see if it's had an effect in terms of getting more people to ride the bus – if it moves the actual ridership metrics any," McKewen said. "We're too early in the process .... But we have seen that it's exceeded our expectations in terms of ... how much people would actually be using this." 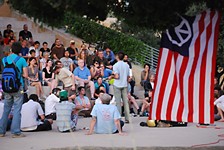