Austin collective builds bikes to donate to others 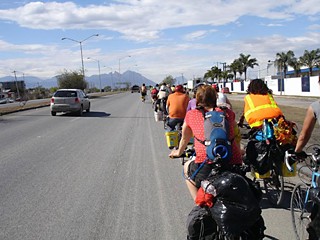 It's early January, and several members of Austin's Bikes Across Borders have just arrived at the U.S.-Mexico border in Southwest Texas. Ciudad Acuña is one of the border's fastest growing transnational metropolitan areas. The group has biked nearly 225 miles from Austin to the border crossing at Piedras Negras and then on to Acuña with the intent of donating their bikes – hand-built and refurbished from bicycle parts pulled from the waste stream. On this almost-annual ride known as the "migration," Bikes Across Borders comes to support its host organization, the Comité Fronterizo de Obrer@s, aka the Border Committee of Workers, and its efforts to organize the first independent union in Ciudad Acuña's infamous maquiladoras.

Mexico in general has more liberal labor laws than the U.S. However, organizing unions was all but illegal on this stretch of the border's industrial area. "When I was in Piedras in 2001, if the owners found out you were in a union, they would fire you," says Katie Dixon, one of the ride's original participants, speaking of past experiences. "A lot of the organizing they're doing in Ciudad Acuña is still fairly clandestine," relates Josh Collier about this year's ride. The two conversed in a backyard on Austin's Eastside with other recent participants after the group's return early this year.

It was Bikes Across Borders' first stay in Ciudad Acuña, and members were right in the middle of a big push by the CFO to aid the workers of the nascent Harness and Accessory Union, assemblers of electrical harnesses on Fords, Volkswagens, and Harley David­sons. "They hope to use the bikes to travel to colonias where cars may not arrive or that are really hard to access. In some neighborhoods there's only walking entrances through the quebradas [ravines]," says Collier.

Until last August, the factories were owned by Alcoa Inc., the world's largest aluminum producer. "But when the workers started organizing, Alcoa sold to a private owner," says Collier. Alcoa's history of targeting its workers in their own maquilas, where wages are low and living conditions unstable, stretches back to the early 2000s. Today, Alcoa's homepage touts product achievements featured at this year's Super Bowl stadium and a giant aluminum battleship, christened last month as the Coronado, with an unmistakable aluminum soda-can sheen.

While media coverage of border issues might have shifted from a post-NAFTA, Zapatista-inspired interest in globalization to a more fearful slew of drug war headlines, "there still is a social justice movement going on," says Judith Rosenberg, board president of Austin tan Cerca de la Frontera (Austin So Close to the Border). The group has been sending delegations of Austinites down to the border since 1999 to witness firsthand the experiences of workers. "It's hard to compare better or worse, as objective situations keep changing, like the 2008 financial crisis," she says. "One important success that [organizers] have always had is that they raise the consciousness of workers. Once workers figure out that because they are Mexican citizens they have rights, they have learned something that changes all sense of themselves."

In the face of the new factory owners and the revolving door of international capital behind them, the harness and accessory workers recently allied with a powerful AFL-CIO-backed national union, known throughout Mexico as Los Mineros. The struggle now is against the new owners and an "official union" the owners hope workers will vote for in the coming months instead of their own independent union. Getting involved in the ups and downs of labor organizing along the border may seem daunting. But that's where "the difference between solidarity and charity is an important theme to Bikes Across Borders," says Collier. "We're responding to the fact that there's this waste in our society. By taking it and turning it into a positive story, making that waste into resources and taking those resources to people who can use them, we have a good time."

To follow this tale of mutual aid between the maquilas of Piedras Negras and Ciudad Acuña is to tell a substantial part of Bikes Across Borders' history. The CFO initially started more than 30 years ago to focus on women's rights along the border, and Bikes Across Borders has been working in solidarity with this group since 2001. The relationship came about through connections with the local American Friends Ser­vice Committee, a Quaker group, and the offshoot Austin tan Cerca de La Frontera, an outgrowth of the AFSC with the specific goal of aiding the individuals and communities affected by economic injustice along the Texas-Mexico border. These connections were catalyzed at the former Rhizome Collective, where Bikes Across Borders maintained a community shop space, taking bike donations of all kinds until the collective's demise to code enforcement in 2009.

With the 2012 migration behind them and another batch of reclaimed bicycles sent south, Bikes Across Borders, like many of the former Rhizome tenants, is working to find a new home. "It's hard for our organization when we don't have a location, when we don't have a roof over our heads," says Rachel Stewart. In the meantime, she and other members are working to launch a mobile bike-repair trailer as a temporary home. "We'd like to continue with community outreach here in Austin during the rest of the year, not just during the annual migration."

Outside Austin, the migration seems to have tapped into larger currents. There's talk of an intercontinental domino-ride from Alaska to Argentina that would bring together similar bike projects and their various causes all across the Americas. "The whole Bikes Across Borders experience is so empowering," reflects Roy Coon after this year's ride. "You're giving service and creating solidarity between yourself and your community, and then you're transferring that to others by giving away your bike. I think that we're just touching on the potential of that." No Home for Rhizome ... for Now
Rhizome Collective looks for a new location 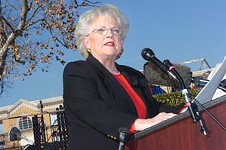 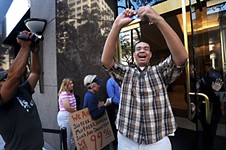