The WikiLeaks emails and the future of information

Members of Occupy Austin float signs outside the office windows of global intelligence company Stratfor to protest its involvement with the infiltration of Occupy Austin. (Photo by John Anderson)

Where is Stratfor when you need it?

The staffers at Austin-based Strategic Forecasting Inc. (the corporate shorthand name is yet another sign of creeping military macho lingo) are likely the only people in town with the time, inclination, and sinecures to read and analyze the latest megarelease from Wiki­Leaks, the first fruits of what is said to be 5 million emails stolen by hackers and passed on to the international nonprofit publisher and its media partners around the world. Unfortunately, the emails were stolen from "global intelligence" firm Stratfor, which is thus in an understandable snit about it, or as CEO George Friedman said, "Having had our property stolen, we will not be victimized twice by submitting to questions about them."

That's too bad, since Friedman and his staff know best the context of many of these documents. But I also can't imagine having to answer for every private email I may have sent or regretted during the last decade. Indeed, seeing as there has since appeared at least one forged email announcing Fried­man's resignation, the company is right to be wary about what happens next. They were robbed, but WikiLeaks didn't rob them, and the largest irony is that WikiLeaks is doing on a massive scale exactly what Stratfor on its website and in its correspondence brags about doing: getting information about global events in every way possible (including some ways that clearly skirt the law), analyzing that information, and making both information and analyses available to the public. (On a microscopic scale, we do the same things at the Chronicle.) The major difference is that Stratfor has turned that occupation into a lucrative business – by subscription or for hire only – and WikiLeaks is doing it on the Internet underground, and for free. No wonder they make Stratfor nervous.

Some of the first emails released in fact concern Stratfor's internal commentary on WikiLeaks and its founder, Julian Assange, and reflect considerable ambivalence about both. Already notorious are offhand sneers by Stratfor VP and former State Department counterterrorism official Fred Burton that Assange should be killed or tortured at Gitmo, that he's a "terrorist" and a "peacenik," and similar nostalgia for the good old days when Burton could idly plot assassinations of any world leaders he might disdain. (Burton is the company's "VP for intelligence," but based on his emails, a more accurate title would be "Blowhard-in-Chief.") Other staffers follow Burton's bullyboy lead.

Yet still other emails reflect actually rational perspectives on WikiLeaks. VP Colin Chapman says Assange is not only not a criminal, but that WikiLeaks' work is indeed akin to Stratfor's: "You could take half a dozen of the more sensational WL leaks and say: 'If you'd subscribed to Stratfor you would have known this a year ago,'" writes Chapman.

Stratfor markets itself as an unbiased "provider of geopolitical analysis," and frankly, most of the emails confirm that claim. The more scandalous revelations thus far have concerned not Stratfor's subscriber-targeted services, but its dubious to-order relationships with corporate clients (Dow Chemical, Coca-Cola, North­rop Grum­man, etc.) and government agencies – the latter apparently on both sides of the ledger. (There was also a short-lived and foolhardy plan for a "StratCap" investment fund, hedging on company intelligence – and underwritten by onetime Longhorn football hero Shea Morenz.)

Stratfor vaingloriously prides itself on its "objective, nonideological" analyses, and working as guns-for-corporate-hire undoubtedly threatens that independence – as does paying informants for "inside" dope, which the company was also apparently doing. At least one FBI agent has resigned over feeding "intel" to Stratfor (whether paid or unpaid is unclear) – including news of a supposedly "sealed indictment" against Assange. (Don't hold your breath for a federal indictment of the agent.) And that Texas Department of Public Safety trooper surveilling Occupy Austin (see "Strange Bedfellows," Feb. 3) – did he just have loose lips or was he moonlighting? (The DPS won't say, but I hope it's at least asking.)

When you privatize information, of course – just as every other public function is being privatized these days – somebody stands to make money off it. Stratfor may still do that (right now it's giving it away on the website), if it can survive the scandal of being an intelligence company not intelligent enough to safeguard its clients' credit card information. (Anoth­er ironic thread in the emails has staffers mocking tech-security company HBGary for being hacked by Anonymous a year ago; pride indeed goeth before a fall.)

The U.S. media have largely been ignoring the Stratfor emails, which have made serious ripples elsewhere around the world, notably in Assange's native Aus­tral­ia. There, newspapers have pressed the government to protect WikiLeaks' journalistic rights against the considerable legal and diplomatic pressure of the U.S. government, which takes its own rights to control information absolutely seriously. Stateside, with a few honorable exceptions (Rolling Stone, Democracy Now!), the media have been ignoring, mocking, or excoriating WikiLeaks, or even (like Blow­hard Burton) calling for Assange's head.

You might think at least some of them would understand: They come for WikiLeaks today; they come for Stratfor – or for The New York Times – tomorrow. 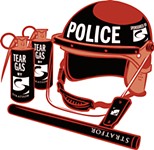 Point Austin: Firefighters in Action
The tech side of human rights and personal privacy