The Charter, the Devil, and the Details 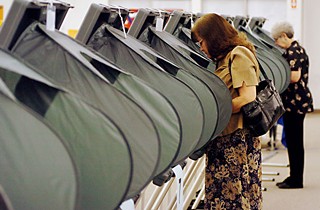 Voters will decide whether to move city elections from May to November. (Photo by John Anderson)

In a planned anticlimax, the City Council-appointed Charter Revision Committee held its final meeting last week (Feb. 16) to review the draft of its report, discuss any potential revisions and corrections, and formally forward its 19 recommendations to the council. In a meeting that lasted not quite an hour, all that sort of got done, although the precise form in which the committee's report will arrive at council remains a little uncertain, primarily because the 15-member committee was split essentially down the middle on what to recommend to council (and ultimately, to voters) on its most contentious charge: the issue of single-member or geographic districts.

At its Feb. 2 meeting, the CRC voted 8-7 to recommend for the council (and a November ballot) a 10-1 districting system (10 council members elected from geographic districts, plus a mayor at large) and rejected by the same vote (and the same voting members) a 10-2-1 hybrid system, which would add two council members elected at large. The 10-2-1 was itself a compromise proposal, in that Mayor Lee Leffingwell had initially suggested (in his own testimony to the committee) that a 6-2-1 hybrid might be both more manageable in size and more acceptable to Austin voters, who have previously rejected districting no fewer than six times. Other witnesses proposed variations (e.g., 8-4-1, or half-city "super-districts"), but over the months of meetings since September the debate within the committee had effectively become 10-1 vs. hybrid, and the final votes reflected that schism.

In the end, the seven members who lost the two votes decided to contribute a minority report defending their own recommendation for a 10-2-1 system, and when the various documents arrive at council, included will be a letter summarizing the minority's arguments – and perhaps a majority letter as well, although that remained uncertain after Thursday's meeting apparently left the "majority" at sixes and sevens (or sevens and eights).

In short, the CRC itself sharply reflected the ambivalence on this issue Austin voters have shown since the early Seventies, and council members will now have to decide, once again, what (if anything) to put before those voters in November.

On its other 18 recommendations, major and minor, the committee was much less divided. Only one member dissented from the recommendation of "some form" of geographic districting; only two from the corollary that an "independent citizens commission" be appointed to draw the maps of any such districts (although there's plenty of devil in the proposed commission's details). Most of the other recommendations (the entire list is posted below) were passed virtually by acclamation. Some highlights (all require council and voter approval):

• Move city elections from May to November

Other recommendations were not directly election-related, and a list this long is unlikely as a whole to make one ballot. Council members and the mayor have generally adopted a wait-and-see approach to the CRC's progress; indeed, said Leffingwell prior to the final meeting, "I'll wait to see precisely what comes out of the committee."

The sharpest division in the committee's discussion concerned whether any at-large districts at all would effectively undermine districting altogether, mirrored by a concern that districts alone would encourage ward politics (and more pragmatically, that such an abrupt, dramatic change would once again be rejected by the voters). Hispanic members were most adamant in defending the 10-1 plan, but the committee split unevenly on majority/minority lines – and the most vocal proponent of a mixed system was attorney Richard Jung, who along with witnesses from the Asian-American community argued that districts alone would leave those minorities not geographically concentrated at a disadvantage. At the Feb. 2 meeting, the NAACP's Nelson Linder angrily accused Jung of speaking only for minority citizens with a "high median income"; Jung responded that he had long believed in working for political coalitions, that Austin's Asian-Americans are far less economically homogenous than Linder implied, and that he "would not back down" from his advocacy for a mixed system.

Leffingwell said that he found it interesting that his three appointees to the CRC each took a different position. Fred Cantu of the Tejano Democrats argued vigorously for a 10-1 system; political consultant David Butts advocated a hybrid and voted for 10-2-1; and engineer Ken Rigsbee, who spoke consistently against any change at all ("six times the voters have said no"), still voted reluctantly for 10-1 ("to move the process forward").

"I didn't vet anybody for their opinions" on districting, commented Leffingwell, "just for their positions in the community, and [that] they're from all over the city." And it would seem, once again, the city is all over the map on how best to change Austin's governing system.

Download the CRC Draft Report, the CRC Minority Report, and the full documentary record is available at www.austintexas.gov/content/2012-charter-revision-committee. 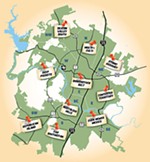 10-1: If It Ain't Baroque, Let's Fix It
Strict requirements may yield a small, homogenous pile of applicants