Susan Benz moved to ground zero in 2006 when she and a co-investor bought a former grocery store and warehouse at the southeast corner of East Sixth and Medina streets. After eight months of renovations, Benz opened the offices of her construction project management firm, Benz Resource Group, on the lower floor, and she moved in upstairs. To her west – toward Downtown – Benz looks across the street at the wooden fence that marks the edge of the East Side Drive-In. The always-hopping Shangri-La sits on the northwest corner of the intersection; the East Side Show Room is directly across the street from the storefront-style face of Benz's building. Benz also shares her block with the Violet Crown Social Club (formerly the Iron Gate), and Cheer Up Char­lie's is just down the way, certainly within amp-shot. Next month, Fader magazine will set up its South by Southwest Fader Fort in what amounts to her backyard.

Benz is what the city might consider the neighborhood's ideal resident. As the treasurer of and Sector Eight resident representative to the East Cesar Chavez Neighbor­hood Planning Team, she has a say in the current overall vision for the neighborhood that hosts the recent influx. She could adopt a stiffer resistance, as some of her neighbors have, but – even from her perch in the heart of it all – she takes a measured tone. "In a lot of cases, [live music] is good for our neighborhood," she says. "I think the [planning] team as a whole sees the music venues as a good thing for East Austin."

Not everyone in Benz's neighborhood is as welcoming. Benz is a relative latecomer – someone who might read as a "gentrifier" to some of the area's more established residents. Her point of view also comes with the ability to leave (as she does) when the invading hordes of SXSW visitors descend for a week. Inasmuch as Benz personifies hope, she also represents a classic problem: How does the city balance the economic benefits of a bursting nightlife scene, the change that inevitably comes with it, and the broader needs of the longtime residents who are trying to hang on for the ride? At least one city-sanctioned effort – the one behind the 2001 East Cesar Chavez Neigh­bor­hood Plan – couldn't wrangle what was coming. And as neighbors, City Council members, and business owners work toward a solution, the further gentrification of the Eastside might just settle things on its own.

East Austin technically begins at Con­gress Avenue, where the block numbering starts over. But the 1962 dedication of I-35 added a tangible barrier that became even more pronounced as the entertainment district around the Downtown sections of Sixth Street blossomed into a Mardi Gras-ish economic paradise for its many bar owners. Even into the 2000s, the highway served as a border that few crossed.

By then, the area to the east of the highway and north of Lady Bird Lake boasted its own set of bars, eateries, and so forth that catered to the Hispanic majority that populated the region – which is to say that the racial segregation formalized in the infamous 1928 city plan had persisted into the 21st century. Its undoing – or at least the way it's been undone – presents Austin with a host of new problems even as it offers solutions.

In the late Nineties, city officials began looking for test cases for their Austin Neighborhood Planning Pilot Project. Fifteen neighborhoods submitted applications to be among the first to develop their own visions, within their boundaries, for the growth that was coming. Three groups were selected, including the East Cesar Chavez neighborhood. For the purposes of the effort, the East Cesar Chavez boundaries were set as I-35 to the west, Lady Bird Lake to the south, Chicon Street to the east, and the alley between Sixth and Seventh streets to the north.

Working with city planners, the East Cesar Chavez team began to further divide the neighborhood into types of desired development. Longtime resident Lori Renteria played a key role, and she says the effort ultimately carved the area up into three basic groupings. Everything south of Cesar Chav­ez would be reserved for residential uses. The area north of Cesar Chavez to south of Fourth Street would be set aside for conditional uses – everything aside from bars, pawn shops, adult entertainment, and auto work. The neighborhood aimed to create an arts and entertainment district north of Fourth Street to its boundary, north of Sixth Street. There were twists and turns and a two-year delay, as virtually every household was surveyed. There would later also be some debate over how so much bar zoning was allowed. Renteria says the cause was an inadvertent typo; one city official calls that possibility "very unlikely." Eventually, the plan was approved in 2001. It is supposed to guide neighborhood development. 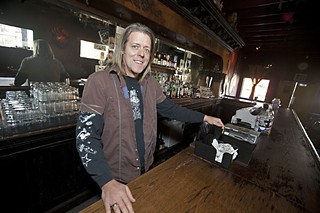 The executive summary of the 1999 draft of the East Cesar Chavez plan spells out the neighborhood's hopes: "The East César Chávez Neighborhood believes it is possible to build a strong, healthy, clean and safe neighborhood with a strong sense of its culture and history where its families can continue to grow and prosper." It was a noble if entirely subjective goal; the measure of its success was shellacked in the sort of intangible good will that ensures a healthy debate for the better part of forever.

The draft also included 16 specific goals that run the gamut one might expect from an attempt to redefine – or at least clarify – a collective vision of impending change. Here, the authors offer a mix of preservation through appropriate zoning, calls for improved public transportation and infrastructure, and crime reduction. The East Cesar Chavez plan's motives seem to match the intention of all such efforts: to offer some protection for area residents in the face of impending change. It was in that spirit that lines were drawn on top of the lines that had already been established. Less than a decade later, many of those lines, as well as the good intentions, would be moot.

This is not to say that there weren't bars in the East Cesar Chavez neighborhood before the recent crossover. Indeed, that fact provides new operators with a tool for their conquest: City code allows current CS-1 (the zoning code that allows for a liquor license) operators to retain their zoning status under most circumstances, even as they turn over. "These bars will just flip over from new owner to new owner unless conditions have changed," says Mark Wal­ters of the city's Planning and Development Review department. For example, the space that is now the Scoot Inn is at the corner of Fourth and Navasota. According to its current operators, Kevin Crutchfield and Jim Stockbauer, it's been a bar since the early 1870s. They date the origins of the place's name to 1940, when, as it says on their website, "after a long succession of owners who operated even through the Depression and Prohibition ... Scoot Ivy and his buddy Red opened Red's Scoot Inn."

By 1997, the operator was Vera Sandoval; Crutchfield and Stockbauer took over in 2006. When they did, the old crowd moved out. "All the Tejanos that were hanging out there before quit us immediately," says Crutchfield.

Crutchfield and Stockbauer weren't the only ones to cross I-35. Randall Stockton and his wife, Donya, who also run the Red River-area live music venue Beerland, moved onto East Sixth almost five years ago when they opened Rio Rita. Stockton and his wife would eventually become involved to one degree or another in eight businesses. These include the Sputnik burger shop – which sits where the Good Knight (formerly Club Oriente), another Stockton establishment, used to operate – Liberty, Live Oak Barbe­cue, Shangri-La, and the Grackle. In 2008, Stockton partnered with former Beer­land employee Tyler Van Aken to open Shangri-La. "I don't think we really anticipated when we opened what the Eastside would become and how quickly it would happen," says Van Aken.

Stockton connects the availability of property east of I-35 to the 2008 recession. "The backstory about the gentrification [is that] a lot of these places catered to a lot of people that perhaps were in construction or things like that, and so when the economy took that serious downturn, and there wasn't any building getting done, and so they lost a lot of customers," he says. "A lot of these bars just weren't doing the business that they used to do."

After the Stocktons and Van Aken came the flood. As former Tejano bars continued to change hands and feel, a deluge of new eateries, food carts, and reimagined spaces rose to complement them. Many of the new bars simply took over the leases of the old ones.

Council Member Mike Martinez, a former firefighter, watched the change. "Having worked on the Eastside my entire career with the fire department from the early Nineties until I was elected to Council, I can say that parts of it are much different from when I was first stationed there," he said via email. "I think every neighborhood loses something when it fundamentally changes. There's debate about whether or not that's a good thing."