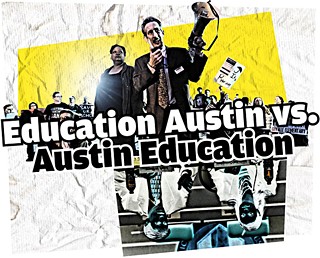 Nov. 21, 2011, was supposed to be a big day for Education Austin. The union was expecting to celebrate the start of another four years representing Austin ISD workers in their dealings with the administration. Instead, Superintendent Meria Carstarphen abruptly convinced the board of trustees to pull the deal and start considering other, unstated options. Now the arrangement is returning for discussion at the Feb. 20 board work session, with the possibility that trustees could dump a staff consultation system that has worked well for four decades.

Here's how the system currently works: Once every four years, AISD names an exclusive consultation representative. This being Texas, "collective bargaining" is not allowed, but the representative organization becomes the voice of district staff to the administration on issues like contract discussions and employment conditions. The group is selected by election: Any union or professional association with more than 200 dues-paying members can request to be on the ballot. For the last 12 years, Education Austin has won that election. This time around, it faced no challenges, so board policy is that the agreement would automatically be extended. The union's current deal was supposed to expire on Dec. 31, 2011, but, courtesy of a hastily approved extension requested by the administration, the board of trustees has until March 1 to determine what it wants to do. According to Education Austin Co-President Ken Zarifis, "The concern on the district's side was that there wasn't enough communications and input from other entities."

Who at the district has those concerns? The board's policy committee gave the current system a clean bill of health last fall, and, before Carstarphen's reversal, the administration made its recommendation by placing the item on the consent agenda. Board President Mark Williams said that he has no strong feelings on the shape of a consultation agreement but argued this is simply reasonable board oversight. "Revisit­ing the topic and just making sure we're doing the right thing is always healthy," he said. His prime concerns are twofold: giving the administration what it feels it needs for full consultation, and ensuring that all staff feel represented. "One of the things that I asked was, 'Have we gotten input from the employees about what serves them well?' Because they may not know enough about exclusive consultation to know one way or the other."

With around 3,000 members, more than a quarter of all AISD employees have joined Education Austin. However, the union is expected to represent all staff during consultation, and Zarifis says that's exactly what they've been doing. He agreed that the union could perhaps do more to reach out to both members and nonmembers, and that depending on big staff meetings to get their input is not enough. The union, he said, needs to "be more sophisticated about it, with technology, with Skype, using phone conferences, and we feel we can do that." However, he rejects the idea that the union only represents or helps its own members. He was particularly frustrated that the administration had pulled the deal from the table at the last minute, leaving the union and district staff in limbo. Education Austin only found out that the administration was backpedaling when the board pulled the agenda item on Nov. 21: a strange move for an administration claiming it wants better consultation with employees. "It was surprising, to say the least," he added.

The big winner from any major revision in the consultation system would be the Association of Texas Profes­sion­al Edu­cat­ors. With 1,700 members, it's a fraction of the size of Education Aus­tin, but it wants an equal voice at the consultation table. However, ATPE is not a union and opposes pretty much every tool in the union arsenal, from collective bargaining to strikes. At the state level, ATPE opposes exclusive agreements like the one currently in operation in AISD, calling them "not appropriate for public education." In spite of that, the local unit mounted an election challenge to Education Austin last year. According to the district, the association withdrew when it was decided that the union and the association would have to cover election costs. However, ATPE Public Relations Director Larry Comer claimed the $7,000 ballot price tag was not the deciding factor. He said, "How much are we going to have to spend to win, or at least have a respectable showing, and at the end of the day, if it is indeed our principle that we have an inclusive model, why are we going to participate in an election?"

As the prime point of contact between the administration on West Sixth Street and employee organizations, AISD Chief Human Capital Officer Michael Houser is on the front line in this discussion. He's been meeting with the board policy committee and representatives of both Education Austin and ATPE, and said he is trying to blend all their interests before he makes any recommendation to the board. So far, he said, "There's a willingness to work between the parties ... but there hasn't been much give or take."