Then There's This: Think Trees 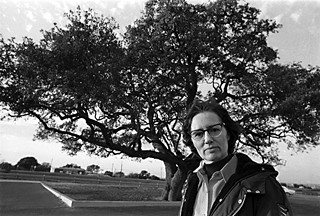 Thirty years to the month after surviving the Allied bombing of Dresden in February 1945, Margret Hofmann was standing in front of a mammoth, ancient tree near I-35 and Braker, gazing sharply into the lens of a camera. She had helped save this 700-year-old Live Oak surrounded by asphalt, and the look in Hofmann's eyes suggests that you shouldn't even think about taking down that tree to free up one more parking space. "I would not want to stand between Margret and anything," said Alan Pogue, the photographer who snapped the photo of Hofmann that day in February 1975. Pogue has an entire collection of Hofmann photos, and in most of the ones he emailed me the other day, Hofmann is in the company of either trees or her husband, Otto, a craftsman and professional organ-builder.

Hofmann died Feb. 2 at the age of 86. Born in Berlin, she came of age during Hitler's rise to power. Her mother died in the Theresienstadt concentration camp. As a young woman in Dresden, Hof­mann herself witnessed all kinds of human casualties and the total devastation of a beautiful city. Little did she know that she would go on to become a City Council member in Austin, Texas, her home for many years. Hofmann served just two years on council, but she never stopped speaking her mind.

She believed that bulldozing an old tree was a crime against nature. Her campaign to save historic trees ultimately led to the passage of Austin's first tree ordinance in 1983. In 2010, the city dedicated a small stand of trees on a traffic island across from City Hall. The park, if you can call it that, is called the Margret Hofmann Oaks. The same year, the City Council unanimously passed a Heritage Tree Ordinance that created even stricter measures to protect the city's urban forest. Getting that sucker passed was a pretty monumental feat because it took three years – three years – of give-and-take between stakeholders, city staff, and boards and commissions.

Yet now, so soon after its passage, members of the Environmental Board and the Planning Commission are already trying to hammer out a way to amend or "mitigate" the ordinance to allow for more density Down­town, and perhaps beyond. The ordinance came under review after the Planning Com­mis­sion denied a developer's request to remove a tree to make way for a condo on Bowie Street. But here's the problem with trying to fix something that isn't broken: Once the city opens the door to tweaking the ordinance to satisfy one development, business will start getting done by applying the ordinance on a case-by-case basis. All that tweaking defeats the purpose of the ordinance because its goal in the first place was not only to protect trees but also to encourage developers to start thinking more creatively about the way they build things. Didn't Margret Hofmann teach us that much?

Pogue first met Hofmann in 1971 at the old Quaker meeting house near campus. The two were part of a strategy session on efforts to end the Vietnam War. Hofmann gave Pogue a copy of her 1962 self-published book, A Key to Survival, about her experience in Dresden during the bombings of World War II. "She felt it was her duty, since she survived, to explain to others what bombing a civilian population means," said Pogue, who had also witnessed war's brutality as a U.S. Army chaplain and medic in Vietnam.

Hofmann also campaigned for more sidewalks to make Austin more pedestrian-friendly. "She wanted Austin to be kind to every form of life, including the ability of every citizen to be able to walk the streets in safety," Pogue said.

Shannon Halley, a policy aide for Council Member Kathie Tovo, got to know Hofmann in 2008 when she was working on her master's thesis on the weighty topic of the history and politics of the urban forest. Hofmann served as her guide to Austin's tree history. The two became friends, and Hofmann entertained Halley with many stories. She recalled Hofmann telling her about the time she was "laughed out of" a City Council meeting after she had spoken up about the lack of sidewalks in South Austin. "They told her, 'Why don't you just get a car?'" Halley said. It was the sidewalk experience at City Hall that prompted her to run for City Council, Halley said. "She was fed up with how little the council listened to citizens."

Oh for a few more council members like Margret Hofmann. 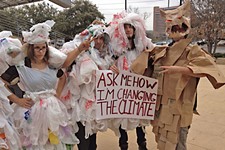