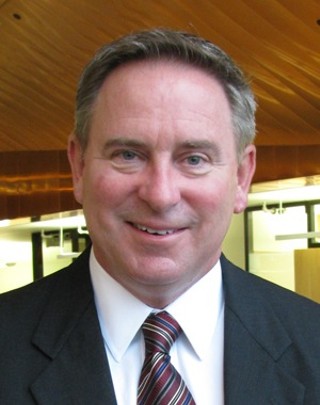 Last week, Austin Energy General Manager Larry Weis briefed City Council on the utility's revised electric rate increase proposal, but the changes have generated lukewarm-to-negative reviews. Some council members said the revisions were a good start toward advancing the ball; others signaled they weren't anywhere close to signing off on the plan. The new plan's most critical test takes place tonight (Thursday, Feb. 9), when council takes another round of testimony in the second public hearing on the proposal at City Hall, 301 W. Second, at 6pm.

Critics of the proposal say the modified rate plan that was unveiled Feb. 2 did little to make the package more acceptable for residential customers – with one largely unfavorable exception: a 6.1% discount for residents living outside Austin city limits in an attempt to ward off wrangling with the Public Utility Commission, or worse, a deregulation effort at the Legislature. "I think its being done almost as a knee-jerk reaction to people talking about appealing this decision" to the PUC, said Carol Biedrzycki, executive director of Texas Rate­payers' Organization to Save Energy. "I don't see how providing this discount to residential customers is going to stop an appeal from being filed."

Also under the new proposal, AE would defer collecting some revenue for two years by phasing in a 12.5% hike in two stages: an 8.7% increase this year, with the remaining 3.8% delayed until October 2014.

What the utility didn't change is the $22 monthly fixed fee, regarded by opponents as the most egregious aspect of the plan – customers currently pay a monthly fixed charge of $6. The utility did, however, include a rate structure for customers who use 200 kilowatts or less, so those consumers would see a somewhat smaller increase on their monthly bills.

AE still has not offered any plan for how it would spend a proposed $7.4 million for the Customer Assistance Program for needy residents. Advocates for low-income residents find this unacceptable, as does Council Member Mike Martinez, who said the utility must first disclose how it intends to run the program before it receives funding.

The utility committed a near-fatal error by going 17 years without increasing its rates and now projects a $75 million deficit this budget year. By early accounts, AE's latest proposal appears to have done little to win favor in the court of public opinion. "There are some changes, but the changes are not meaningful," said Biedrzycki. "It is almost like window dressing."