The high cost of being a no-kill city

Last September, as Austin Animal Ser­vices was celebrating its sixth straight month with a 90% live-outcome rate, 80 miles down I-35 in San Antonio, that city's Animal Care Services department was dealing with its own, far grimmer, statistical reality. As San Antonio closed out fiscal year 2011, it was looking at a dismal 31% live-outcome rate, the kind of number that could drive even the most optimistic animal lover to despair.

In response, heads rolled. The city demoted shelter director Gary Hendel, who had been brought in two years earlier to lower San Antonio's soaring euthanasia rates, and replaced him with Joe Angelo, the assistant city budget director of innovation and reform. Though Angelo had no prior experience running an animal shelter, he had a plan to help bring the city's save rate up: private/public partnerships.

"While coming up with a strategy to reduce our euthanasia rates, we researched the best practices of no-kill communities like Austin and Reno [Nev.], and the recurring theme with all of them was having a high-volume pet partner," said Angelo. San Anton­io had little community involvement and almost no fostering and adoption infrastructure, no support systems like the kind Austin Animal Services depends on to keep animals moving safely out of the shelter, so Angelo and his staff looked north for inspiration and saw the success Austin had partnering with rescue group Austin Pets Alive!. They decided the best way to start raising their numbers would be to get an Austin Pets Alive! of their own.

On Jan. 19, San Antonio Pets Alive!, a spin-off of the Austin original, and run (at least for now) by APA! Executive Director Ellen Jefferson, celebrated its birth by signing a lucrative partnership agreement with the city of San Antonio. Under the terms of the agreement, SAPA! will get up to $200,000 for a period of up to one year to help Animal Care Services increase its live release rate by up to 4,000 animals. In other words, SAPA! will get $50 a head for every animal it takes out of ACS, not to exceed 4,000 animals over the year. Add that $200,000 to the $120,000 APA! is getting from its Town Lake Animal Center contract, and the $100,000 the group got for winning the ASPCA adoption challenge in November, and fiscal year 2012 is turning out to be a nice one both for Jefferson and her team and for the animals they rescue.

All of which is presumably great for San Antonio and for the Pets Alive! brand – but where does it leave Austin?

APA! played a crucial role in getting Austin to "no-kill" status, and will need to continue playing a crucial role if the city is to be able to stay there. And with Austin Animal Services settling into a new shelter that houses nearly 60 fewer dogs than TLAC did – and with intake numbers rising all the time – it might just be that maintaining no-kill status is harder than achieving no-kill status. "It's safe to say we've been operating at or over capacity every day since we moved into the new shelter," says Chief Animal Services Officer Abigail Smith. "Some days we have some space in holding; some days we don't. We're full. We don't have the space to house an appropriate number of animals.

"Looking at the raw data, after two months, we're looking at increased intake of animals from the Eastside – more dogs, fewer adoptions and visitors. Things aren't happening quickly enough to keep the flow at a manageable level."

Over at TLAC, meanwhile, APA! is housing an average of 53 dogs a day, only six below its maximum allowed under the terms of the contract the group signed with the city. In addition, Smith says, the shelter is currently fostering 120 animals. Every­where you look, the city is at capacity. Smith hopes people don't simply look at the shelter's sunny save rate – 92% in December – and think the hard work has already been done. "Because we're no-kill, people aren't seeing what's behind the scenes, which is we're struggling," she says.

To further complicate matters, APA!'s main Manchaca facility may not be theirs much longer. According to Jefferson, the landlord is most likely going to be selling the property in May, so the group has started looking for a new home. Jefferson wouldn't rule out TLAC as an option, though moving in would require an amendment to the current contract with the city – moreover, the city built that new Levander Loop shelter because TLAC was deemed to be unfit for long-term animal care.

So things could get very difficult if APA! either diminishes its work here to concentrate on San Antonio or, as some fear, SAPA! starts bringing animals rescued in San Antonio to cages and homes in Austin, which has an established rescue infrastructure, but one that is already straining at the seams. Jefferson says she isn't concerned about San Antonio's currently bare-bones animal welfare community. "Austin didn't have any of this when we started either," she says. "We're in the process of getting fosters and adopters and volunteers signed up. People will start coming forward when they hear about it. The city is involved, and the community is engaged."

As for the concern that APA! might be less involved in Austin now that the group is branching out, Jefferson – who is currently splitting her time between Austin and San Antonio – says her group has set up "organizational safeguards" to ensure that doesn't happen. "We're still as committed as ever to keeping Austin no-kill." 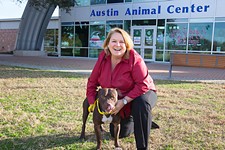