If you drive east along Loyola Lane past Highway 183 until you're almost floating in Walter E. Long Lake, you'll pass on the way a big slab of nothing. But not for much longer. The city has three years – and a $3 million planning grant from the U.S. Department of Housing and Urban Development – to develop an environmentally driven master plan for a shovel-ready project that could house 750 families, plus retailers and employers. In part, the work is intended to break the long-held conviction that East Austin is the dumping ground for every undesirable public project, from power plants to animal shelters – without any forward-thinking investment. For Rebecca Giello, assistant director of the Neighbor­hood Housing & Community Development Office, the purpose is to create "self-sufficiency for a community in need." The goals are fairly lofty: to turn the 200-plus-acre site into a perfect melding of affordability and ecology, implementing every environmental best practice – from energy-efficient building techniques to water conservation to zero-waste technology – while providing the population and commercial boost the area needs. The buzz word is sustainability, but the challenge for the city is balancing and meshing the concepts of environmental and economic sustainability, as well as – the most nebulous goal of all – creating a truly sustainable community.

Why Colony Park, and why now? "Why not?" responds Giello. The site is less than a third of the size of the city's last big master-planned community, now the Mueller neighborhood. "It's big enough to be a big deal," she said, "but it's not a mini Mueller." Instead of repeating what was done at the old airport site, the plan is to take the best practices and lessons learned there and everywhere else in the city to make Colony Park something unique. In May 2001, the city paid $3 million for the 258-acre site. Under the administration of the Austin Hous­ing Finance Corporation, 50 acres have already been dedicated to parkland, the Turner-Roberts Recreation Center, and Austin Independent School District's Overton Elementary. Besides the original purchase price for the land, the city has sunk $5.6 million into Turner-Roberts and $22 million into infrastructure and flood control for Loyola Lane. "You're looking at an area where the infrastructure's there, to a great degree," Giello said. The next step is attracting the people and the businesses to make that infrastructure investment worthwhile.

All the money already spent could be a drop in the bucket compared to the potential cost of the project itself. That's why the federal grant is pivotal, giving the city money and breathing room to not just create a dream project, but to find realistic ways to fund it. NCHD policy and planning manager Kelly Nichols called the grant "a convergence of opportunity. We had this piece of land that Betsy [Spencer], our new director, is very interested in developing, but not necessarily in the same old way. She and [Chief Sustainability Officer Lucia Athens] had spent the last year taking city officials out [to see] and really focusing on sustainability before this came about."

A key aspect of the job for Nichols and her office is tracking notices of funding availability coming out of HUD – in fact, roughly 52% of the office's budget comes from federal sources – and sustainability has become an increasingly significant requirement for successful applicants. This particular slab of HUD funding, called a Community Challenge Planning Grant, is intended to promote local sustainability hand in hand with affordable housing. Nichols said, "When we saw this opportunity, we thought, 'This is a home run.'"

Not only did the nature of the grant help crystallize the concept for the project, but it could also open further funding sources when the project breaks ground. At the launch, HUD's San Antonio field office director Richard Lopez told the city that HUD is "your forever partner" and noted that the grant could be used to research and apply for other grants for the construction phase. Mayor Lee Leffingwell has taken an interest in this as a pilot project, one that could be duplicated in other underdeveloped areas such as East Riverside and Airport Boulevard. And not just Austin: As part of the grant, the city and its partners must host a national conference, designed to disseminate the best practices and policy lessons learned from the planning experience. Nichols said, "Three years from now, we will be ready to dig our shovels in." 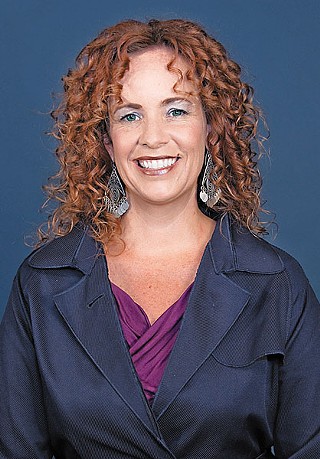 To a certain degree, this project is about kick-starting and controlling development in a stretch of East Austin that is relatively underdeveloped and underpopulated. That story is probably told most clearly in the closest AISD middle school, Garcia. Although demographic projections point to growth in the area, population has been a problem for the school district since it opened the campus in 2008, with 46% of its 1,215 seats empty in the 2010-11 school year. Even if every one of the 829 eligible children in its attendance zone had gone to Garcia, it still would have had 386 spare seats last year. And even with Austin's ever-swelling population, AISD forecasts only 901 middle schoolers in the area by 2015. There was little doubt that the area needed a middle school to make student travel times reasonable, but the population simply is not there yet to fill the rooms. Placing 750 homes right on Garcia's back doorstep could be a big boost for the campus.

AISD's executive director of facilities, Paul Turner, said that the district tracks all multiunit projects through the planning phase, "but we normally don't start projecting the enrollment rates and calculating the absorption rates until they start on the infrastructure." However, the back-of-an-envelope calculation is that for every 300 single-family units in this area of Austin, the district could be looking at an additional 240 students – 120 for its elementaries and 120 split between middle and high schools.

AISD is not alone in having a vested interest in the project. Indeed, at the launch announcement, Lopez said that the number and strength of the partnerships listed in Austin's proposal were big selling points for HUD. The list of partners already on board includes obvious ones, such as Austin Energy and Austin Resource Recovery, but Nichols and Giello said their office has been contacted by other city agencies, including the Austin Fire Department, which has a real interest in getting involved at the planning stage. Giello said, "There's a mobile unit that [the county's] Health and Human Services [Department] has that services that area, so maybe a clinic would be an ideal thing to look at."

One component Lopez called vital to HUD is transportation: Enter Capital Metro. The transit agency's principal planner, James Gamez, called the neighborhood "a high ridership area" and noted that his office and the city have been in discussions about the Colony Park plot since 2009. Currently this stretch of Loyola Lane is effectively two disconnected population blocks, separated by the city's land. Gamez said, "We basically see it as an opportunity to improve the connectivity within the neighborhood, to make it easier for people to get to our current bus service." Since the grant was announced, there have been preliminary talks about timelines and the creation of an interagency coordination team, which Cap Metro would likely join. "We're one of the agencies that they've talked about as being crucial to stay involved throughout the project," Gamez said.

While much of the master-planning phase will be about finding cash for construction and development, the city has already split the planning grant among three key activities. First, there's the master plan itself, a $750,000 study that will include market and economic studies, anchor tenant negotiations, land use, and roadway planning. Next up,
$1.2 million for the entitlement and infrastructure planning phase, to pay for rezoning the property as a Planned Unit Development; and finally, $1 million for the sustainable design.

It's the definition of "sustainable" that may come under the closest inspection. The obvious component is the environmental aspect, as shown in the commitment to zero-waste. But there's also the broader idea of a "sustainable community" – one that will provide homes and jobs for families for as long as they want to remain. Unfortunately, there is political tension between those two concepts of sustainable. Take the recent rate-increase proposal from Austin Energy: Some of its opponents, including the Austin American-Statesman ("Is Austin Energy Too Green," Jan. 17, p.A-1) have suggested that green energy and affordable living may be mutually exclusive. This also taps into another fear prevalent in East Austin – the dreaded specter of gentrification. County Commissioner Ron Davis, whose Precinct 1 includes the planned development, is just as sure as Giello that he doesn't want Colony Park to be another Mueller, but for different reasons. "They had intended for a lot of that housing to be affordable for persons in the surrounding area," he said, "and of course that's not the case." While he backs the environmentally sustainable parts of the plan, his concerns as commissioner are twofold: that the project meshes with the county's own long-term facility and infrastructure planning in the area, and that it does not dislodge the current population by pricing them out of the neighborhood. As the project is on city-owned property and within city limits, Davis' office has no direct jurisdiction, but he said he wants to make sure affordability remains part of the discussion. While he backs mixed-use and mixed-income development, he asked: "Is it going to drive people out of the area? ... There have to be some safeguards."

Davis is not alone in that concern. As part of its livability principals, HUD requires that a project support existing communities. The city has already budgeted $294,466 – nearly double what the terms of the HUD grant require – for its public engagement process, and the NCHD will be relying a great deal on local members of the Com­mun­ity Development Commission to lead the discussion. For NCHD's Nichols, bringing community stakeholders and interested agencies into that consultation process "is the heart of sustainability. That's what this project is about, taking the time to plan this piece of land so that it's the best public investment it can be."

The whole purpose of a Community Challenge Planning Grant is to allow municipalities time to plan in detail the best possible master-planned community. The city of Austin already knows, in the broadest strokes, its goals for the Colony Park Sustainable Community Pilot Project. The exact details may change over time, but the targets should remain roughly the same.

• Incorporate zero waste diversion for the whole project, including the construction phase, meaning no waste goes to a landfill

• Include on-site recycling and composting

Then There's This: A Farr Vision For Colony Park
Chosen consultant vows to 'plan with the whole person in mind'