Can Austin Get Its Arms Around ESDs? 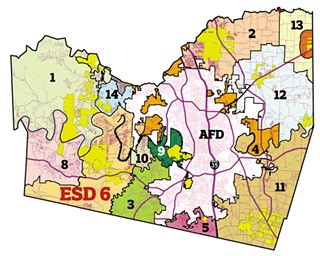 For most Austin residents, the city is largely a benevolent entity. But for those living outside the city limits – in the extraterritorial jurisdictions and unincorporated areas – Austin sometimes feels like a creature from a Fifties horror movie, swelling ever outward, swallowing whatever territories it touches, imposing zoning standards and regulations, and ruthlessly expanding its tax base in a pitiless orgy of annexation. And when it comes to dealing with an ever-growing Austin, there's one indisputable truth: You can run, but you can't hide. As those suburban areas – which were developed outside of the city system of regulation and taxation – start to expect more urban infrastructure and services, they find themselves having to play by city rules.

That's a recent realization for some leaders of Emergency Services District 6. ESDs are political subdivisions in Texas created to provide fire and emergency services to unincorporated areas, many of them rural and relatively unpopulated. There are 14 ESDs located wholly or partially within Trav­­is County, and some of them have grown quite a lot. ESD 6, which recently changed its name to Lake Travis Fire Res­cue, has five firehouses serving an area encompassing about 200 square miles west of the city, including Lakeway, the Hills, Bee Cave, and Steiner Ranch, which was very nearly consumed by last year's wildfires.

Every time Austin annexes part of an outlying district, it takes a portion of that district's tax base to provide emergency services. Rather than sit back and wait for that to happen piecemeal, the ESD 6 Board of Com­mis­sioners last year gave LTFR clearance to look into creating a partnership with Aus­tin that would essentially fold ESD 6 into the Austin Fire Department, thereby preserving Lake Travis fire and rescue jobs and smoothing the way for what many see as an inevitable annexation.

"The firefighters in ESD 6 provide excellent service, but we're looking toward the future," said Travis County Commissioner Karen Huber, who appointed one of the five commissioners on the ESD board. The problem, Huber says, comes down to money. Property taxes in ESD 6 are maxed out at 10 cents per $100 valuation, which simply isn't enough to sustain an adequate fire department. "ESD 6 wants urban services," said the commissioner, "but doesn't have the valuation for it."

Though negotiations between ESD 6 and the city are still in the preliminary stages, the next step could be a proposed contract for service agreement under which firefighters would be taken in by Lake Travis AFD and the district would contract with Austin for emergency services while still retaining taxing authority. That way, when Austin comes to annex ESD 6, Lake Travis firefighters will already be a part of both AFD and the Austin Firefighters Association.

Such an agreement might be the simplest solution to the problem of providing sustainable emergency services in the Lake Travis area, but that doesn't mean it would be easy. Moving the firefighters into AFD would require both Lake Travis and the firefighters' association to revise their collective bargaining agreements. Plus it raises numerous questions about how to fold one department into the other fairly and equitably. For example, how would experienced LTFR firefighters fit into the AFD pay scale? How would AFD assure that LTFR firefighters have the same training as its firefighters? What about rank? Would lieutenants in Lake Travis automatically become lieutenants in Austin? Would chiefs? And, significantly, how would the new firefighters get vested into the existing Austin pension system?

According to AFA President Bob Nicks, making sure the pension question is answered in a way that's cost-neutral is one of the "drop-dead" demands the union would have before agreeing to any merger with ESD 6. "Bringing ESD 6 firefighters in with pension seniority if they haven't been contributing to the pension fund would be costly and may not be fair," said Nicks. "We can probably bring them in with zero seniority, under the same assumption as a new person, but we can't roll their pensions in."

Meanwhile, LTFR Chief Jim Linardos says he can see the long-term value in an agreement between his district and Austin, so long as his firefighters are taken care of. "This agreement could provide continuity of emergency service, so nothing would change if the city annexes," Linardos said. "But what happens to my experienced firefighters in that scenario?"

At the moment, that scenario is little more than an idea on a chalkboard. Two weeks ago, the union held a series of informational meetings on the ESD 6 issue for its members, and Nicks says the group plans to hold a series of workshops in the next few weeks. In addition, both AFA and the Lake Travis Firefighters Association Local 4117 have agreed to delay negotiations until the city releases a preliminary financial assumption for a potential agreement some time in February or early March. That, said Nicks, may determine whether a merger between Austin and ESD 6 is viable. "We're adamant not to move until we know the money thing is feasible. If the money is unreasonable, we won't do it," said Nicks. "This is more a marathon than a sprint."

If a deal on ESD 6 does go through, it may only be a matter of time before Travis County's 13 other emergency districts follow. Austin currently has mutual aid agreements with the surrounding ESDs to ensure multiagency responses to large-scale emergency situations (agreements put to use during last summer's wildfires), but the next logical step for a rapidly growing, rapidly urbanizing region might be to erase once and for all the line between regional departments and put the whole show under one roof.