Lauren Ross, an environmental engineer and small-business owner currently under contract with the city of Austin, took the witness stand in federal court last week to testify against her client of 17 years. Biting the hand that feeds you is kind of unthinkable in this economy, especially for a professional consultant of Ross' caliber – her opinions are often sought by environmentalists and developers alike. But Ross, who estimates that her three-person firm has earned about half a million dollars from the city since 1994, is not someone who goes along to get along.

In this instance, she took the witness stand in support of two Occupy Austin plaintiffs who sued the city on grounds that its criminal trespass policy, which bans alleged offenders from City Hall property for one year, violates protected free speech rights under the First Amendment. (See "Did City Stifle Free Speech?") A ruling is expected in early January.

The lawsuit grew out of the Halloween weekend arrests of several dozen Occupy Austin protesters, including Ross, on the City Hall plaza. "I had intended to spend the night at Occupy Austin and ended up spending the night in the Travis County jail instead," Ross said. "But it never occurred to me that risking arrest meant that I would be banned from City Hall."

The Haves and Have-Nots

As it turned out, Ross' criminal trespass charge was quickly dismissed, although the temporary ban from City Hall did cause her to miss a meeting with the city manager to discuss groundwater assessment work she had performed in relation to Water Treatment Plant No. 4. Because Ross knew what channels to work – in this case, she called the office of Council Member Kathie Tovo – the engineer soon regained her freedom to enter City Hall.

Those who know Ross know she is as passionate about social justice and environmental issues as she is about her engineering work. She was part of the anti-Fortune 500 effort in 2000 and the anti-Iraq war protests in 2003, and a participant in political movements from Mexico to Canada to Scotland. So it shouldn't come as a surprise that Ross would risk obtaining future work from the city because she believes so strongly in what the Occupy movement represents.

She also believes she has a moral obligation to expose the willy-nilly-ness of the city's two-month-old criminal trespass policy.

"Those of us who feel entitled quickly applied for an appeal and we got it," she explained adding that those who didn't apply for an appeal or didn't know they could appeal are still banned from City Hall property. "So [the policy] seems to me to be completely arbitrary, and it reinforces cultural privilege." That in itself is ironic, considering cultural privilege is exactly what the larger Occupy movement is working to overturn – "people who know how to game the system are gaming it to their financial advantage, while everyone else is getting left behind."

Since her arrest, Ross has mostly lain low, showing up at only a few Occupy events here and there. Early the morning of Dec. 19, for example, she delivered a Crock-Pot of warm oatmeal to her Occupy allies outside Austin Independent School District headquarters on West Sixth Street. The sleepy crew had sacrificed warmth and a good night's rest to reserve space in line for parents, teachers, and students wishing to speak that night against the AISD board's decision to relinquish control of two East Austin schools to a South Texas charter school company.

More recently, Ross has devoted much of her energy to a spin-off Occupy group called Activate Austin, which is narrowing its focus to address sensitive subjects like racism, classism, gender discrimination, and homophobia. On the specific topic of racism, Ross says the hot-button issue of the day involves the Austin Police Department. "There's a group within Occupy Austin that says 'the police protect us; we need to have a great, cooperative relationship with them.'" But that line of thinking, says Ross, who is white, fails to consider the adverse experiences of those who are targeted by police because of the color of their skin. "There has to be space in our political movement [to address] the police experience," she said.

As Ross describes it, Activate Austin is committed to a "radical analysis" – she prefers the word "radical" over "progressive" – "of what's happening in this community, and make good old liberal Austin the city it thinks it is." Sure, she says, Austin is friendly, it fosters a democratic process, and it allows people (with the recent exception of a few regulars) to speak at City Council meetings. The missing link, though, is the lack of ongoing, committed discussion about race. "We really don't look at the legacy of racism in this community," she says.

Ross doesn't know if her willingness to speak out about some of the city's flaws will jeopardize her future business relationship with the city. "I run a risk in talking about this and carry the privileged assumption that I can exercise my free speech rights and still be able to pay my mortgage and put food on the table." Free speech is worth fighting for, she insists, even if it does happen to threaten her ability to keep a roof over her head.

"The city will either decide that they value a strong, independent voice on their projects or that they need to have people that they can keep a tighter rein on – which would not be me. You can't spend your whole life second-guessing what the outcome is going to be. You just have to do what you believe in." 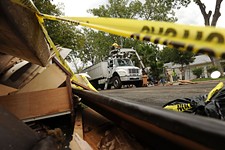 As Austin Grows, So Does the Risk of Flood
Forget the 100-year storms. City flooding happens all the time, often right in your backyard.