Live music capital of the world, my ass 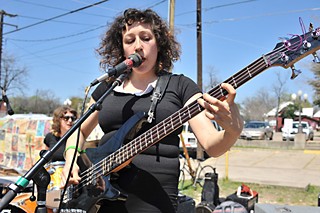 Dozens of live music venues have recently received sound ordinance-related citations or warnings from police, including Cheer Up Charlie's, which hosted this Grass Widow set during South by Southwest 2010. (Photo by Sandy Carson)

The trouble with making an overly grandiose statement about Austin is that the people who live and work here are actually expected to live up to it. And that, predictably, can cause some tension.

Take the slogan "live music capital of the world," for example. In November, the Austin Police Department received 74 noise complaints stemming from live music. This prompted a new enforcement effort. "There's been a special initiative going on for the past three weeks," confirmed Downtown Cmdr. John Romoser.

As one might imagine, noise complaints – though certainly relevant in the live music capital of the world – don't register as a hot priority for police. Romoser said that patrol officers on regular duty are tasked to deal with more pressing big-city matters, and so, when citizens dial 311 (or even 911) to register their dissatisfaction with the results of Austin's moniker, their troubles can get overlooked. "[We were] starting to get squeezed by people complaining, 'You're not responding,'" he said.

The result? Two-man enforcement teams roaming in and around the Downtown entertainment district. Over the first two weeks of the action, the department handed out 26 tickets and warnings for various violations. On the third, that number was down to two. When the Chronicle last spoke to him, Romoser said the final weekend of enforcement was scheduled for Dec. 16-18 and that he expected the number of citations to be closer to that of the third weekend than those of the first two.

On Dec. 5, Cheer Up Charlie's owner Tamara Hoover told the Austin Music Com­mis­sion that her establishment "received a ticket for having music equipment that could produce decibel levels above 85, even though the equipment wasn't being used." Though Hoover acknowledged that she was also hosting a band inside, she insisted that the decibel levels were below restrictions.

To hear Hoover tell it, she's been a good neighbor. In response to complaints from a neighborhood association that she says is harassing her, Hoover built a $10,000 sound barrier to cut what can be heard by her neighbors. And Romoser notes that his records show only a warning for Cheer Up Charlie's from December – the only evidence he can find of any form of citation issued to the bar. But Cheer Up Charlie's sits along the relatively recently bloomed East Sixth Street. As such, it represents an early wave of live music establishments that cater to the city's live music capital call – and one of those predictable sources of tension.

Hoover and Will Rhodes, production manager of Club de Ville, whose Red River venue was recently cited as part of APD's enforcement presence, both spoke during the commission's Citizens Communication. Chair Brad Spies expressed concern and asked the two to provide the commission with written accounts. Hoover, Rhodes, and other music club reps are expected to return to the Music Commission's next meeting, Jan. 9, for more discussion on the police crackdown. 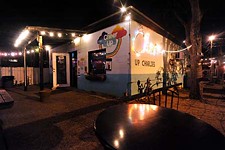