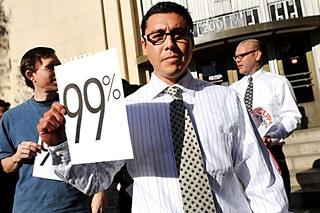 Rudy Sanchez (center) and Kris Sleeman (r) stand outside U.S. District Court in Austin, where a judge heard their attorneys' arguments that the city violated First Amendment rights by issuing criminal trespass notices to individuals during an Occupy protest at City Hall. (Photo by John Anderson)

Is a city policy that allows security staff to issue criminal trespass notices to individuals – banning them from darkening the door of City Hall for up to a year for a variety of "disruptive" behaviors – a violation of the First Amendment? Or, is the policy, signed by City Manager Marc Ott on Nov. 1, simply a way to keep the plaza and building safe from dangerous criminal elements? Those are the questions now before federal District Judge Lee Yeakel, who will rule soon on whether the policy will be allowed to stand.

A lawsuit over the policy was brought by two Occupy Austin protesters – Rudy Sanchez and Kris Sleeman – each of whom was arrested in connection with the ongoing protest at City Hall and ultimately handed a so-called "CTN," banning them from setting foot on City Hall property for a year. The ban would prevent the men not only from protesting at the site, but also from attending any meetings or conducting business of any kind at the seat of city government. According to lawyers representing the men, including the Texas Civil Rights Project's Jim Harrington, the policy was developed as a way to "manage" the Occupy Austin protests, but in so doing, the policy has trampled the First Amendment's free speech protections, as attorney Ryan Bates, co-counsel for the two men, told Yeakel during his opening statement on Dec. 21. Over the course of the day-and-a-half bench trial, attorneys for Sanchez and Sleeman offered evidence that the enforcement of the policy was arbitrary and does not comport with the strict requirements of the First Amendment.

Among the roughly 100 people issued CTNs since the Occupy protest began Oct. 6 are individuals banned for "provocative" or offensive language – such as cursing at building security staff – though the accompanying paperwork makes no detailed description of the allegedly dangerous language used. Indeed, Sanchez was arrested along with 37 others on Oct. 30 after he was told by Austin Police to stop videotaping the arrests. Sleeman was issued a CTN after he was arrested for an outstanding traffic warrant near the plaza, but not while actually protesting at the site. The city has since reviewed the circumstances of each CTN and has lifted the ban for each. But the use of the CTNs has had a chilling effect on protest at City Hall, the plaintiffs argue. According to environmental engineer Lauren Ross, who does contract work for the city (working now on the Water Treatment Plant No. 4 project and the restoration of Shoal Creek), she has not felt the same level of comfort entering City Hall to do her business since her Oct. 29 arrest while protesting as part of the Occupy demonstration. She was told she would be banned from the property for a year – and subsequently missed a meeting with Ott because she could not get the notice reviewed in time for the prescheduled appointment. Her CTN was subsequently rescinded. She testified last week that enforcement of the new policy has "basically destroyed our ability to create a movement culture in the City Hall space." Since receiving a CTN, she said, "it is uncomfortable for me to be at City Hall in a way it wasn't before the CTN."

The city, led by Assistant City Attorney Chris Edwards, told Yeakel that the "right to free speech is not absolute" and is instead subject to reasonable "time, place, manner restrictions" – which is what the city policy does. She said the policy was never crafted to respond to the Occupy protest – indeed, there is no way the city could have crafted and had Ott sign off on a policy less than 24 hours after the Halloween weekend arrests, as some have alleged. Instead, she said the policy was developed in response to previous problems – notably, the August ejection from council chambers of two individuals (including John Bush from Texans for Accountable Government) who disrupted a council meeting – and is meant simply as a way to secure the property for the use of all Austin residents. The Occupy protest does not even resemble the political protest begun in October – "the only thing going on now is head-to-toe sleeping bags on every step of the amphitheater." Now, Edwards said, "violence, drugs, and criminal activity is exactly what is going on at City Hall" – activities that are not protected by the First Amendment.

Yeakel declined to issue a ruling from the bench at the close of the trial on Thursday and said he would instead work on a written opinion. That opinion is expected early in the new year.