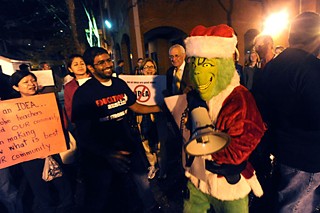 A protester dressed as the Grinch (the one who stole Christmas) joins opponents of the IDEA charter school plan outside Austin ISD headquarters Monday night. See "AISD Approves Its Big IDEA, 6-3." (Photo by John Anderson)

On the positive side, the Austin Inde­pen­dent School District's agreement to bring the IDEA Public Schools charter program into the Eastside certainly gave its students an instant education in local politics – of the grimly practical sort not generally available in classrooms. That may be the only good news to come out of the controversy, which featured the most spectacularly bungled adoption and public outreach process managed by a local government in quite some time. By the time the board of trustees made its formal adoption vote after midnight Monday, the board majority and Superintendent Meria Carstarphen had succeeded in alienating virtually everyone with some interest in the matter – most particularly those Eastside parents and students to be directly affected by IDEA's arrival at Allan Elementary next fall. Had the district been trying to intentionally undermine IDEA's potential relationships with the community, they couldn't have done a better job.

As for the decision itself, despite two board meetings and roughly a dozen hours in all of discussion, it was clear from the outset that six trustees were determined to approve the still-under-revision IDEA contract come hell, high water, or broad public opposition, and nothing said by any citizen, public official, or opposing trustee would have any effect on that vote. The Mon-day tip-off was in fact at-large Trustee Annette LoVoi's opening motion to decline the contract; the board had visibly emerged from executive session procedurally and emotionally polarized, 30-plus citizen speakers denouncing the deal had not made a dent, and the eventual 6-3 vote to defeat LoVoi's motion (after much harrumphing on all sides) firmly anticipated how the night was going to go.

Indeed, Monday's meeting resembled nothing so much as a miniature version of the current incarnation of the Texas House: a dominant majority truculently annoyed at having to defend its presumptive decisions, a beleaguered minority vainly attempting to palatably amend what it could not defeat, and board President Mark Williams in the role of Speaker Joe Straus, nervously trying to maintain order and portray the vexed occasion as the considered deliberations of mature, well-meaning adults, before an audience of outraged Austinites and meek IDEA students trucked in from the Valley.

All very inspiring and educational.

Hours in, when Carstarphen finally got her moment, ostensibly to present the substance of the IDEA project for approval, she instead spent her time in a filibuster of self-justification over the administration's "public process." She insisted that the community outreach that everyone from elementary school parents to high school teachers to former mayors Gus Garcia and Carole Keeton Strayhorn described as woefully lacking was instead broad, persistent, and effective. The fact that not a single Austinite had signed up to support IDEA made no tangible impression on her or the board; the fact that she and her administration are now faced with selling this program to a school community in virtually unified opposition to it (opposition greatly reinforced by her mishandling of the preparation) went unremarked.

Laying that groundwork, Carstarphen certainly hasn't done IDEA any favors. Whatever its ostensible virtues, the "nonprofit" company will enter the school district to a hostile audience filled with suspicions exacerbated by a school administration that has taken the preemptive position – as Carstarphen put it to a Chronicle delegation summoned two weeks ago to her office – that "charters are here to stay, like it or not." Similarly, AISD trustee Sam Guz­man told the Austin American-Statesman, "IDEA is coming, one way or another" – referring to IDEA CEO Tom Torkelson's implicit threats to set up a competitive shop in Austin if the district failed to hire his firm. Torkelson also told the Statesman that those who oppose IDEA are mostly "professional protestors – people who are paid to oppose public school choice for parents."

Torkelson's real targets are teachers, whom he considers disposable at-will subcontractors. But I wonder if he'll have the guts to repeat that nonsense to the East­side parents and students who camped out or stood in the rain for hours for a lotto's chance to speak for two minutes to the trustees.

So, where are we now? The trustees were still amending the rushed, skeleton contract from the dais Monday – amendments Torkelson quickly endorsed – and embattled district counsel Mel Waxler is supposed to soon provide a revised version for execution. Allan Elementary parents in particular were declaring continuing opposition, some threatening a boycott. But of course, it's of the nature of public schools that they provide the primary or only option for most families – that's precisely why charter operators want to get their hands on the public revenue stream. In that light, one can only hope that whatever happens next fall at Allan, and down the line at the much officially abused Eastside Memorial, it eventually works at least as well for those students and their families as the district's current programs.

The board majority has felt no real need to explain or defend its vote, which appears to be a combination of defending its beleaguered and combative chief executive and succumbing to the fairy dust of the word "charter" that has magically entranced everybody from Barack Obama on down to poor parents paying tuition and buying uniforms at the latest fly-by-night operation hanging out a shingle. Calls to eject the incumbents at the next election are certainly understandable, but the truth is that competent school board candidates – for no salary at a thankless and increasingly resourceless job – are not exactly available in abundance.

What we are seeing at AISD is the outcome of relentless state cutbacks in combination with the same fetishized market-worship that is steadily undermining all public institutions, a broadly based folly that increasingly valorizes personal profit or achievement over shared community values. Unfortunately, it's not the fools selling or buying this particular snake oil who will suffer most from the exchange. It's the next generation of students, who will watch the pieces crumbling from their public schools and not realize it was ever any ­better.