The protracted fight over what is art, according to the city of Bee Cave, isn't going to dampen the holiday spirit for Michael Kleinman, owner of Planet K. Kleinman said Saturday that he will set up shop outside his newest store, at Bee Caves Road and Highway 71, to sell his wares to holiday shoppers. Kleinman has been unable to secure the permits needed to remodel the interior of the new store, site of the old Trading Post, because the city has objected to art posted on the building walls – a pastoral scene painted by Kerry Fitzgerald (aka Austin funnyman Kerry Awn) – and has said it won't shake loose the permits until the art comes down. As such, Kleinman will set up a booth outside the store, which will remain open daily, 10am-10pm, until the city issues the remodeling permits. (For more on this, see "Planet K Disrupts Bee Cave's Orbit," May 13.) 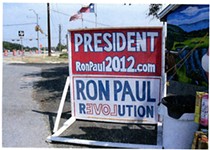 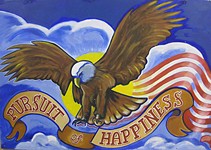