Formula One Back in Play 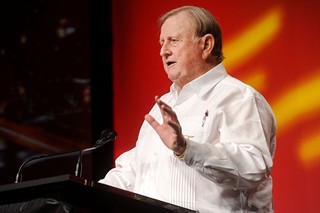 In a last-minute deal between the Circuit of the Americas and Formula One, Austin's 2012 grand prix has been saved. At the same time, even with checks mailed and developers firing up the bulldozers to complete the track, there are still a whole bunch of unanswered questions.

The project had been imperiled by a fight between the local group and F1 CEO Bernie Ecclestone. The developers suspended construction on the track, claiming that Ecclestone was making unreasonable demands, while the F1 boss said that the project did not have the cash to cover the $25 million hosting fee and the state of Texas seemed to back away from no-questions-asked public funding. However, on Dec. 6, sources close to the Austin project told the Chronicle that the chances for a last-minute deal were "looking good." And in the early hours of Dec. 7, the FIA World Motor Sports confirmed that rumor. Gathering in New Delhi for its quarterly meeting, racing's governing body approved the provisional calendar they had drafted in June, confirming that Austin will host the United States Grand Prix on Nov. 18, 2012. The circuit has separately confirmed that this is a 10-year deal, like the agreement originally struck between Ecclestone and former race car driver and family friend Tavo Hellmund and his promotion group, Full Throttle Productions. Explain­ing their change in fortunes, circuit founding partner Red McCombs simply said, "Mr. Ecclestone received his check today" and that construction would recommence immediately.

Now for the questions. The original deal's collapse seemed to result from a rift between Hellmund and circuit founding partner Bobby Epstein. So there are real questions about the shape of this new deal between F1 and the circuit. Then there's the issue of whether the project will still be able to apply for the state's Major Events Trust Fund, especially after New Jersey starts hosting the rival Grand Prix of America in 2013.

And what of Hellmund, the project's original founding partner? He wasn't quoted in the press release, but instead Epstein simply stated, "We're glad that Tavo's vision of bringing F1 to the people of Texas will become a reality." However, Hellmund is the project's deepest connection to the racing business: It was his close friendship with former MotoGP World Champion Kevin Schwantz that helped the touring motorbike series sign on to race in Austin. So far there has been no word of what this new agreement means for MotoGP or V8 Supercars, both of which are provisionally scheduled to start racing in Austin in 2013.

Formula One, Circuit of the Americas, Red McCombs