New congressional map gives Travis a three-way split, which is a lot better than five 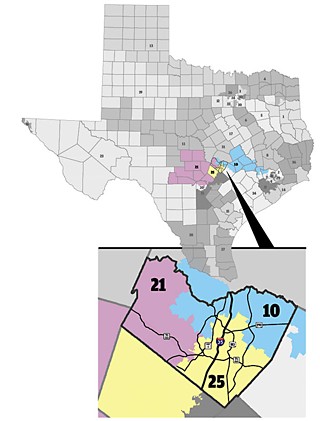 A three-judge federal panel released new maps for the state Legislature on Nov. 18 (see "New Map Tweaks Local House Seats," Nov. 25) and five days later reached a consensus on new congressional districts. All three use the 2001 maps as a baseline, rather than the Legislature's 2011 districts, to ensure compliance with the Voting Rights Act. As such, the three maps reflect growth in minority populations, which coincidentally creates significant new opportunities for Democrats. The GOP response was predictable grandstanding: On Nov. 26, Attorney General Greg Abbott announced he would ask the U.S. Supreme Court for a stay on the new House and Senate maps. Echoing Judge Jerry Smith's dissenting opinion on the House battle lines, Abbott argued that the new maps are "far reaching and extreme."

Yet when filing for the 2012 primaries opened Nov. 28, candidates from both parties were already treating Abbott's efforts like a last-ditch and doomed effort. The electoral consequences are enormous but are summed up in the Travis County congressional fights. The GOP plan would have split the county five ways, and the insane Congressional District 35 plan – seemingly named because it stretched along I-35 – put local incumbent Doggett in a pitched primary battle with San Antonio's Castro. The court's interim map not only dissolved that plan in favor of a three-way split for Travis but also created districts that could well see both men in Congress. Doggett's new-look CD 25 is more compact and Travis-based than ever, while Castro announced Nov. 28 that he would run to replace retiring veteran Democrat Charlie Gonzalez in San Antonio's restored CD 20. More troublesome for Republicans, Democrats are even eying the previously unwinnable CD 10, which has lost much of its GOP-friendly anchor in Harris County and added voters in Travis. Doggett said he was "greatly encouraged" that Austin was at least partially glued back together by the courts but noted that "since the Court defines this as an 'interim' plan, I know that in another 18 months, after this election, Gov. Perry and the GOP-controlled Texas Legislature may yet again scheme to oust me through redistricting."

That reversal of fortunes is being felt across the state. House Dems who had been paired with their colleagues in primary battles find that not only are their current seats safe, but there are a slew of new congressional opportunities opening up. The Democratic Lone Star Project calculated that three new minority or minority-coalition opportunity districts are created under the court map. By restoring fairer representation, the courts have left ambitious Republicans in panic mode. Congressional hopefuls like former Railroad Commissioner Michael Williams and former Secretary of State Roger Wil­liams looked like surefire winners under the old map; now both are left without any obvious district in which to run.

As for that first victim of the new maps, it is a name that has been greeted with particular schadenfreude by Democrats. State Rep. Aaron Peña of Edinburg switched parties in 2010, dumping the D after his name for an R and giving the GOP a seemingly unstoppable 101-seat supermajority in the House. Now the defector has announced that he will not run for re-election. Apparently under the new fairer maps, "the district I have been placed in is a 75 percent Democratic seat," he said.