Fork in the Road on Sixth Street 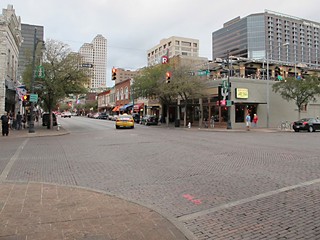 Some Downtown stakeholders want Sixth Street to be as much a destination spot during the day as it is at night. (Photo by Richard Whittaker)

The 6ixth Street Austin Association is not known for contentious politics, but a recent clash over its board membership has raised some eyebrows. Now stakeholders and property owners are wondering whether it was just a symbolic changing of the guard or whether it marks a major change for one of Downtown's most powerful voices.

At the annual board meeting on Nov. 9, Alamo Drafthouse CEO Tim League (who recently acquired his second Sixth Street property this year) was standing down as the association's chair. As required by its bylaws, the nominations committee had submitted a slate of candidates for offices, so League arrived at the meeting expecting a smooth transition to the new board. Then, Realtor and Sixth Street property owner Carl Daywood walked in with a block of more than 40 proxy votes "and voted in his own board," League said. As a result, all board members up for re-election – including board vice-chair and League's presumptive successor, Wild About Music CEO Fred Schmidt – were dumped and replaced by new names on Daywood's slate. Daywood himself described the situation as simply "the democratic process at work." He said, "Every annual election they've always had proxy voting, but to my knowledge we had the biggest turnout we've ever had, either physically present or proxies from the property owners."

Schmidt was far less conciliatory. "If you call an ambush democracy, then I guess OK," he said. "Was the vote democratic? Yes. But was it necessary or justified? Absolutely not." When Schmidt heard that a surprisingly large number of members of the association requested proxy votes prior to the election, he contacted Daywood to discuss meeting attendance. Daywood gave him no clue about the coup, instead saying that he might not even attend the meeting. Schmidt noted that Daywood's supporters include some of the traditionally least engaged members of the association. In fact, only two members of what he called "Carl's ambush party" had thrown their hats into the ring to be vetted by the nominating committee. However, even with his proxy votes, Daywood was forced to accept some names from the original committee slate. "Had we known that there was some kind of crazy overthrow brewing," Schmidt said, "we would have been able to get additional votes to not have this succeed. However, the organization was caught blindsided."

The seven blocks of East Sixth Street west of I-35 are a hub for competing Downtown interests and groups. While the property owners' association is seen as the political talking shop, dealing with big-picture issues, the Pecan Street Merchants' Association runs events like the annual Pecan Street Festival. Overlying this are the business-centric Downtown Austin Al­li­ance and residents' Downtown Aus­tin Neighborhood Association, both of which are paying close attention to any possible ripples from this changing of the guard. "We have a pretty clear vision of where we are wanting to go, and I am optimistic about working with the new board," said Josh Allen, executive director and the sole employee of the 6ixth Street Austin Association.

However, the new board may bring old feuds bubbling back to the surface. League said there were "personality conflicts" with Daywood last year, and the executive committee rejected his request to become chair. As a result, Daywood resigned from the board. (When asked about his exit, Day­wood declined to comment, simply saying, "I did not want to dedicate my time and energy on the direction [the association] was going.") Even with these latest events, League extended an olive branch. "Carl's really passionate about the street," League said, "and he's very much into the historic preservation of the district, as am I." In turn, Daywood praised the outgoing board, calling League "a good leader." However, Schmidt said the board bent over backward to get Daywood and his allies involved during the past year but was constantly rebuffed. They "had absolutely no reason or justification to do what they did," he said.

The question now is whether the new lineup marks a new agenda for the group. Under League and the old board, the association's policy centered on making Sixth Street an 18-hour-a-day, seven-days-a-week entertainment district, balancing its reputation as a weekend party destination with daytime activities and round-the-clock shopping and dining. Daywood, however, is highly critical of proposals such as making Sixth Street part of the city's Great Streets Program – a public works street-enhancement endeavor – and argues it could endanger its national historic district status. There has also been an undeniable tension among long-term tenants, some who fear that the growth of adult-only shot bars makes the district less friendly to retailers, live music, and residents.

There may have already been consequences from the potential board shuffle. On Nov. 10, City Council was scheduled to vote to renew the East Sixth Street Public Improvement District, but Council Member Mike Mar­tin­ez moved to postpone the vote until the Dec. 8 meeting. Sixth Street has been a PID since 2004, when the association – then known as the Pecan Street Owners Assoc­i­a­tion – contracted with the city to run the PID. The provisional PID budget for 2012 dedicates $135,880 toward infrastructure improvements, marketing, and administration, funded by a mixture of a taxes on Sixth Street property owners and contributions from the association and the city. Martinez asked his fellow council members to delay the vote "in light of some new information ... and a request from some of the property owners." Allen said, "My understanding is they just had a few questions they wanted to make sure they got answered before they felt comfortable casting a vote."

League will remain chair of the board until the next meeting (date to be determined), when the board will elect its new leadership, and after that, he will keep a seat reserved for the retiring chair. But that's not the only reason he and Daywood may have to learn to coexist. Six months ago, League purchased 313 E. Sixth – infamously the former home of Midnight Cowboy Modeling and Oriental Massage – and on Nov. 15, he told the Chronicle that the Draft­house had just closed on property at 614 E. Sixth, which currently houses Klub Krucial. The plan is to convert the back and second floor of the building into the new head office for the Drafthouse, while the front will become 500 square feet of leased retail. League said he's working with DAA Associate Director Molly Alexander "to find some cool tenants."