With the year coming to a close and spring around the corner, it's time for a fresh series of announcements and local citizen engagement.

I'm talking, of course, about Austin's latest steps in the long-awaited redesign of the city's website. (What, you thought I was talking about something else?)

By now, you're excused if it seems like chatter about updates and improvements to the city website are as perennial as City Coun­cil elections. Browsing the Austin Government Online page, or Austin GO, one's reminded that the city began soliciting input to overhaul its website (www.cityofaustin.org) back in 2007. When we checked in with the effort a year and a half later (see "The Genius of the Crowd ... Source," June 5, 2009), the effort had basically been rebooted anew as local coders crashed plans to award the redesign contract to an out-of-state tech firm – a slap in the face to Silicon Hills development talent.

So yes, efforts to give Austin a website that reflects our techie bona fides – and more importantly, offers a greater utility to residents by way of online utility payments, greater data availability, and dozens of other features clamored for by redesign proponents – have repeatedly been delayed. But it looks like the load time is finally shrinking some.

Starting next week, the city will begin a series of "Sneak Peek and User Testing Sessions" to optimize and debug what will ultimately be the new municipal website. (The sessions start Tuesday, Nov. 29; head to – where else? – the city's website to learn more.)

Although delays and the occasional misstep have slowed the redesign process, it's fascinating to think where we'd be if it hadn't. For instance, think of the smartphone and app explosion that's occurred in the past four years. All those apps require raw material – data – for tapping and scrolling. And one of the most exciting components of the redesign is the assortment of data sets the city will release, which enterprising programmers, us journos, and citizens alike can mine and refine.

We got a preview of the possibilities earlier this year during the protracted debate over changes to pay-parking hours Down­town, when council ultimately recommended that data on parking availability be aggregated so third parties can craft applications directing hapless Downtown drivers to where they might find a spot.

The city already has some nifty applications tucked away on its website – the Austin Police Department's CrimeViewer (www.austintx.gov/police/crimeinformation.htm) maps offenses down to the block, and an indexed, searchable listing of Health and Human Ser­vices' restaurant inspection scores (www.austintx.gov/health/restaurant/search.cfm) has become a popular lunchtime link here at Chron HQ. But the promise of the city releasing all this information – encompassing transportation and public safety and health intel, plus demographics, development, lobbyists, and more, all in accessible data sets – will be an asset to start-ups, data journalists, and the citizenry at large. They're currently taking submissions for what data sets you want the city to provide.

While Thanksgiving means a plentiful bounty of carbs and football – at least for the more fortunate among us – it's strictly reheated leftovers at City Hall for the next few weeks. (That's fine for the Hustle, playing catch-up after two weeks away following his marriage to the beautiful Mrs. Hustle.) City Council is similarly on sabbatical, not convening for a full meeting until Dec. 8, then ending the year with a final meeting the following week, Dec. 15. As the chambers grow cold, council elections are beginning to heat up with Mayor Lee Leffingwell and council members Mike Martinez and Bill Spelman all announcing their re-election intentions and naming campaign teams. The only member up for re-election yet to do so is Mayor Pro Tem Sheryl Cole, as speculation mounts on whether she'll run again for Place 6 or challenge the mayor.

Still, there's unfinished business before winter hibernation begins in earnest. Another election question – what form of geographic council representation should the city put before voters next year – will get further vetting from the 2012 Charter Revision Com­mit­tee, which meets Dec. 1 at the George Wash­ing­ton Carver Lib­rary. And of course, the current council consideration of the Downtown Austin Plan – largely revolving around the dispute over whether to preserve Central Urban Redevelopment zoning allowing additional density Downtown or to scrap CURE, leaving only the city's Downtown Density Bonus program in place – may see resolution when it returns for second and third readings at council's Dec. 8 get-together.

The Hustle's daily blog will resume after Thanks­giv­ing. In the meantime, load up on "likes" at www.facebook.com/cityhallhustle. 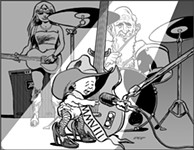