Our governor's free fall is almost too painful to watch 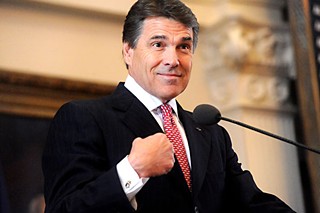 Five months ago, campaign pros Dave Carney and Rob Johnson were applauded for jumping ship from Newt Gingrich's ailing presidential nomination campaign and signing back on with their old boss Rick Perry. Quick lesson: Switch campaigns in haste, repent at leisure. The mid-November national polls show Gingrich and Perry's fellow Texan, Congressman Ron Paul, gaining ground fast on front-runner Mitt Romney. Meanwhile Perry's numbers continue to collapse, and ever since his ill-fated performance at the Nov. 9 CNBC debate, his campaign has been summed up by one word: "oops."

Perry's campaign had been on life support for weeks. Yet his failure to remember which three federal departments he had pledged to close down if he became president – Educa­tion, Com­merce, and the hard-to-recall Energy – may have been the long-anticipated death blow. Having already threatened to pull out of future debates, Perry's campaign geniuses decided to bypass the stump and launch a charm offensive. Their solution was an uncomfortable and unfunny appearance on the Late Show With David Letterman, reading a supposedly self-deprecating Top 10 list (plans for follow-up tours of the Borscht Belt and the Chitlin' Circuit are way premature).

The governor's latest desperate populist flail is his "Uproot and Overhaul Washington" plan, in which he suggests halving congres­sional pay and limiting federal judicial appointments to 18 years. However, this may not play well with the national Republican Party: Larding the U.S. Supreme Court with conservative jurists is a key part of the GOP's long-term strategy to retain power even when they lose Congress and the White House. However, the Texas GOP's disdain for national strategies was made clear Oct. 26, when the state party launched the "Raised in Texas, Stays in Texas" campaign. Decrying the tithe collected by groups like the Repub­lican Na­tion­al Committee, Republican Party of Tex­as Chair Steve Munisteri whined that it was Texas money being "sent to Wash­ing­ton, D.C., and doled out across the country."

None of this seems to have helped Perry, who has not led a major national poll since mid-September, when CNN showed him beating Romney by seven points. He's lost more than half his support since then, and polls show him stuck in single digits in three key early primary states: Iowa, New Hampshire, and South Carolina. Oops indeed.