Tweet
print
write a letter
The Austin Police officers involved in the fatal May 30 shooting of 20-year-old Byron Carter should be fired, Austin NAACP President Nelson Linder told the Citizen Review Panel Monday night. "They should be fired, no questions asked," he told the panel, which met to review the Austin Police Department Internal Affairs investigation of the shooting on East Eighth. Police say bike patrol Officers Nathan Wagner and Jeffrey Rodriguez approached the pair, who they suspected were casing cars just east of I-35. The officers lost sight of the pair; when they spotted them again, they were already in the car of Carter's 16-year-old friend, who has not been named because of his age. Police say that the teen drove the car toward the officers, pinning Rodriguez. Afraid that Rodriguez was trapped under the car, Wagner fired multiple rounds at the vehicle, wounding the teen and striking Carter four times, killing him. Linder told the panel that the shooting was indefensible and the most disturbing case of police brutality that he'd seen in a decade. "This case is bad. You can't defend it; it's that bad," he said. Anthony Walker with the New Black Panther Party also addressed the crowd, asking the panel to recommend an outside investigation. The panel will decide within 10 days whether to submit to Police Chief Art Acevedo any recommendations – including officer discipline, training, or external review. Acevedo has until the end of the month to decide whether to impose any discipline. 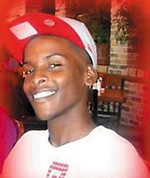