EPic Downtown plan continues, and the devil's always in the zoning details

OK, that's a little bit of a stretch, but as the Hustle's readers know, the amount of time spent on the Downtown Austin Plan has stretched out for quite some time. It began in 2005 and has therefore taken longer to draft and adopt than the Imagine Austin Comprehensive Plan, which lays out a vision for the entire city.

Finally, after a recent delay, the Down­town Austin Plan is wending its way back to council. And a concerted push is under way in support of the long-crafted document, although flash points will inevitably emerge when the plan comes to council today (Thursday, Nov. 3).

A push for the plan was visible late last week, at the annual meeting of the Downtown Austin Alliance. While the DAA's red-eye breakfast was devoted to the topic of urbanism generally, the city's adoption of the Downtown Austin Plan was on everyone's tongue. Mayor Lee Leffingwell, introducing the morning's keynote speaker, referenced former Mayor Will Wynn's goal of 25,000 Austinites living Downtown, saying the urban core was at a "critical juncture."

Also on hand that morning was Mayor Pro Tem Sheryl Cole, whose identification with the Downtown Austin Plan has come primarily via the Waller Creek project. Cole, years back with former Mayor Pro Tem Betty Dunker­ley, pushed a funding mechanism and helped procure county and nonprofit buy-in for the Waller Creek tunnel, which will maintain a steady flow of water in the Downtown creek, accommodate sometimes disastrous storm-water runoff, and pay for creekside improvements. Cole sought to defuse one concern of change brought about by the tunnel project – that by pulling blocks of Red River real estate out of the 100-year floodplain, thus enabling broader development, the project might endanger the street's vaunted club scene. Calling Red River important, she compared the project generally to Chicago's Millennium Park – an oasis in an urban milieu, to be sure, but hardly the sort of neighborhood that contemplates Beerland. She went on to emphasize that "Downtown belongs to the entire city," both physically and financially – with 80% of property taxes generated Downtown used to underwrite municipal expenses in other neighborhoods.

Indeed, Red River club owners may view the new Waller Creek as a fait accompli – what with Emo's impending departure and new, further Eastside haunts recalling the street's early, grimy glory days. But there are other questions being raised by the plan – the same flash points that helped postpone it from a previously scheduled adoption.

That would be the zoning language in the plan and the controversy over whether to preserve Central Urban Redevelopment, also known as CURE, zoning. In order to build a more dense Downtown than current zoning designations allow, developers have had the option either to ask for CURE zoning or to enter into the city's interim Downtown Density Bonus Program. However, since the Density Bonus Program was created, not one project has taken the city up on the latter offer, which requires specific community concessions (most importantly, affordable housing or a fee in lieu thereof), whereas CURE zoning doesn't carry those requirements.

The draft Downtown Austin Plan talks tough on the discrepancy, saying: "The existing CURE re-zoning process has proven to be a 'loophole' that has rendered the existing interim Density Bonus Program ineffective. ... The use of CURE to obtain additional density and height should be replaced by a formalized density bonus system that can be processed administratively and that can provide all stakeholders, including developers and community members more certainty, predictability and transparency." But when the draft came to council in August, Kathie Tovo and others were dismayed that city staff had recommended continuing CURE zoning, in a modified form, as opposed to doing away with it entirely. The Planning Commission then voted 7-0 to reject the new recommendation and go back to the original; in the same vein, Laura Morrison recently compiled a list of CURE approvals that have come to council while the DDB Program has been in place, with foregone fees totaling some $22 million.

That's not to say there's unanimity on CURE's abolition. At that August meeting, Council Member Bill Spelman floated the possibility of preserving CURE as a "safety valve" for worthy projects that might not, for some reason or another, work as well with DDB allowances. (And of course, there's the philosophical argument that the city should be promoting density Downtown.) Another wrinkle in the current proposal is that the housing fee-in-lieu "apply only to residential development, which consistently accrues additional economic value from additional height and density" – a proposal Morrison has said she would like to revisit in the future.

So council should definitely be raising Cain this Thursday – no height limit required.

Talk about good timing – the Hustle's honeymooning for the next few weeks. See you soon! 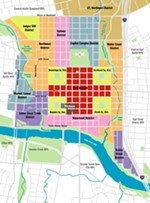 Downtown Austin Plan: Why Do It?
Developing Stories