"[T]he City does not support the use of food waste disposals in its promotional or educational materials," it reads, "and would continue its existing ban on commercial disposals." Lurking behind that declaration are the concerns of at least two other city departments: Austin Water and the relatively new Office of Sustainability. And on a larger scale, those concerns, coupled with projections about the upper-end goals of the project, suggest the central question that Gedert and his team will face as they attempt to herd Austin toward the green promised land: What's it really going to take to get to zero waste?

For the record, zero waste isn't quite zero. In 2008, the city adopted a goal of 90% landfill diversion – an achievement that would see only 10% of Austinites' solid waste ticketed for burial. Gedert's goals are slightly more ambitious. According to the zero-waste plan – a separate but integral document – Gedert hopes to get the city up to and perhaps above the 95% mark.

Whatever the final percentage, Gedert – really, anyone with designs on a municipal zero-waste program – will have to contend along the way with the imposing monolith of U.S. consumer culture. "From where we're at now – about 38 percent – getting to 50 percent just means using the blue carts more effectively," he says. "Getting to 75 percent would be expanding into multifamily settings and getting some compostables ... into place. We can get to 75 percent – those are behavior changes there.

This is where the disposals come in – or, rather, don't. For more than a year, the company responsible for the ubiquitous InSinkErator kitchen sink food-waste-grinding machine, Emerson Appliance Solutions, has tried to poke its way into a partnership with the city of Austin, using the city's zero-waste goals for ammo. "InSinkErator has offered to the City ... to serve as a technical resource as Austin embarks on its goal to become zero waste," reads an official statement from the firm. "It believes that correct food disposer use already plays an important role in landfill diversion that should be acknowledged and supported, and offers to partner with the City (financial resources, research, industry expertise) on an effort aimed at informing the public about proper and effective use of their disposers, and the environmental benefits of [the water utility's] current operations (e.g., biogas, Dillo Dirt, etc.)."

But although Gedert is on the lookout for any help he can get in moving Austin up and beyond the 75% diversion zone, that will not, it seems, come from disposal manufacturers. The biggest problem with waste disposals, says Austin Water spokesman Jas­on Hill, is the amount of fats and grease in the food waste entering the disposal. "Most people use these improperly, and the grease winds up clogging pipes and causing sanitary sewer overflows. Advocating increased use of garbage disposals would, we fear, lead to more problems with sewer overflows – after we've invested so much in the Austin Clean Water Program."

Indeed, InSinkErator's efforts prompted a six-page memo from Austin's Chief Sustainability Officer Lucia Athens. "Pro­ponents of food waste disposal technologies claim that disposal units represent an easy and attractive solution to help the City reach its Zero Waste goals. However, this claim is not as simple as it may seem," Athens wrote to Mayor Lee Leffingwell and City Council members. "Food waste that is introduced into the City's wastewater system, land-applied or composted at Hornsby Bend, and re-processed into Dillo Dirt is a better alternative compared to sending food waste to the landfill. However, other methods of food scrap management exist which may be more desirable."

This would be the "highest and best use" argument. Athens says that, with the city's new take on trash, "there is no waste."

"It's all resources," she says, adding later that the approach asks, "What is the most value that can be delivered for that resource?" Translated into preferred goals, the "highest and best use" idea argues for the likes of composting – which would, ideally, provide residents with a source of fertilizer that they could use to grow more food. She applies the no-waste paradigm, therefore, to food scraps. "[It's] a food resource," she says. "If we send it down a disposal ... that's not the highest and best use of that commodity."

All this, of course, is a small segment of the much larger zero-waste whole. The remainder of the plan calls for Austinites to employ the highest and best uses of former landfill-destined products such as furniture and building materials, appliances, and ... wait for it ... polymers. Athens compares the waste – ahem, resource – plan to efforts to achieve energy efficiency. "There's still a lot of low-hanging fruit right now .... Once you do all of those things, it gets harder and harder," she says. Still, Athens remains optimistic. "I do think that some of those cultural shifts are already starting to happen," she says. She calls the plan "a work in progress" and suggests that as technology and evolving markets push manufacturers toward greener production "it will be easier to make progress."

Gedert agrees. "How realistic is it?" he asked, echoing this reporter's question. "I feel that Austin can be the front line of that wave, but it is a riding of the wave," he says. "I believe that there is a national and a worldwide effort to 'green' products."

The Resource Recovery master plan is available at www.cityofaustin.org/sws. Gedert is scheduled to present it to City Council on Nov. 3. 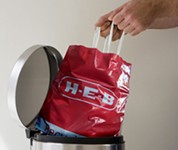