Council takes its stand with as few voters as possible 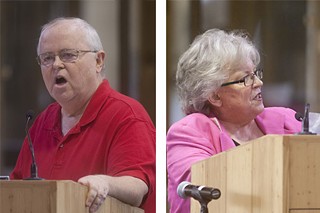 The debate over the City Council election date created a number of strange bedfellows favoring the November 2012 date, including this pair of political opposites – former state Rep. Glen Maxey, a Democrat, and former mayor Carole Keeton Strayhorn, a Republican. (Photo by Jana Birchum)

Does a city council installed by a vote of 10% of registered voters possess any legitimacy as a representative government?

That was the unacknowledged elephant in the room last week at City Hall as council spent three days awkwardly debating whether to move next year's municipal election to November – when state, federal, and presidential contests will bring out 60-70% of the electorate – or to stick with May, when an embarrassing 10% (or less) has become the predictable local turnout. By now, most of you know council voted 4-3 to stand pat in May, taking three separate votes over a week to do so. Mayor Pro Tem Sheryl Cole and Council Members Bill Spelman, Laura Morrison, and Kathie Tovo combined to maintain the spring date; Mayor Lee Leffingwell and Council Members Mike Martinez and Chris Riley endorsed the move to the fall. (See "City Hall Hustle".)

The main arguments solidified a couple of weeks ago, and they didn't change much, although with citizens' groups mobilizing (most in favor of the move), tensions had risen. Opponents rested on 1) the City Char­ter, 2) not extending their own terms, and 3) May elections being less confusing for voters, even if there are so many less of them. Proponents countered that higher turnout means literally broader democracy and, moreover, that having two 2012 elections (as is inevitable with other city measures bound for fall) will more than double the cost.

There was much less of Reason 3 last week, as it put members in the awkward position of defending minuscule spring turnout. They mostly shifted to the position that any "charter change" (although the shift is both contemplated in the charter and specifically authorized by state law) must be enacted by the voters themselves. That also means it wouldn't take effect – by means, comically, of a November 2012 charter election – before November 2013 at the earliest.

Is There a Voter in the House?

Reasons 1 and 2 are undeniably questions of principle, and Cole especially made an emotional defense of the charter as her overriding concern, even though the argument effectively honors the votes of long-dead Austinites over those of living, breathing citizens. But more importantly, the issue at hand is more fundamental than the charter itself. The question is whether there is any legitimacy at all to the polite but deepening fiction that City Council members – any of them – can be said to represent the whole community when they have all been elected by so few voters. Council meetings have increasingly become a sort of absurdist theatre where everybody (including council gadflies and miscellaneous hangers-on) has a role to play – but there is no one at all in the audience.

The same is true of the argument that this debate is "really" about who will be elected in the spring, or will the mayor be retained or tossed, or whether it's legitimate to "extend" council terms by six months without an election. The real answer to those increasingly abstract problems is that it makes no difference – whoever is elected in May, mayor or council member, will have no more legitimate mandate than they do right this minute. If it's wrong for them to serve until November, it's frankly wrong for them to serve another day. Having been elected by 10% or so of the eligible voters – which is to say by roughly a 5% share of upmarket neighborhood homeowners who take an obsessive interest in these things – they have little more right to hold public office than a random selection of seven people dragged in off the street and plopped onto the dais.

I respect all the current council members, and indeed sit on an editorial board that endorsed every one – one reason I find so comical the exaggerated distinctions their various partisans (and campaigns) like to imagine among them at election time. I certainly haven't agreed with everything they've done, but they do their best at a very difficult (often worse than thankless) job. But this issue is not simply a dispute over debatable public policy. In declining to move the election date, the majority is refusing to acknowledge that the spring turnout numbers are not just lamentably low, but also represent a structural crisis in representative government. (Off-year Novem­bers – when turnout already runs at a sorry 35% – are also a dismal standard, but that appears where we're headed.)

As a citizen and as a commentator on city government, I've inevitably participated in the increasingly tattered fiction that City Council and its proceedings represent, for good or ill, the will of the entire community. Despite all our public pretensions to the contrary, representative government in Aus­tin badly needs a jump-start, and the Legislature handed council a golden opportunity to recharge its electoral batteries. (The Lege didn't care about that, of course – in changing its election calendar, it was simply grandstanding again over military voters.)

By voting to maintain the May election, council decided to perpetuate the fiction of representation for three more years, or at least until the Charter Revision Committee can come up with an electoral revision plan – new calendar, single-member districts, and all – that the voters will finally swallow. In the wake of subsequent decisions by Austin ISD and Austin Community College to move to November, council has also taken the de facto decision to spend nearly $2 million on an election it doesn't need to hold. I hope the members currently standing on abstract principle will remember that expenditure next September when they're trying to eke out a hundred thousand here, a hundred thousand there to maintain diminishing social services. (Whatever else the cost might represent, it's undoubtedly a waste of money they won't be able to blame on city staff.)

Maybe the decision will motivate sufficient numbers of May voters to make the expense seem worth it, although recent experience suggests little reason to think so. More likely, a high-school stadium's worth of voters will determine the official leadership for a city of 800,000 people. Maybe that makes sense – since council chambers are steadily coming to resemble a barely noticed, after-class meeting of student government.