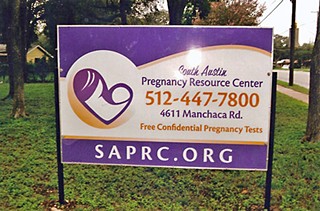 The South Austin Pregnancy Resource Center is one of several local operators suing the city on free-speech violations. (Photo courtesy of SAPRC.org)

Several operators of Austin crisis pregnancy centers have filed suit in federal court, claiming that a city ordinance requiring them to post notice of services they do not provide is an illegal infringement on their free speech and religious freedoms. The lawsuit – brought by the Roman Catholic Diocese of Austin, Catholic Charities of Central Texas, the Austin Pregnancy Resource Center, and the South Austin Pregnancy Resource Center – argues that the ordinance, which requires posting of signage stating that the "Limited Service Pregnancy Center" does not provide or make referrals for abortion services or provide "U.S. Food and Drug Admin­i­stra­tion approved birth control drugs and medical devices," amounts to "unlawful viewpoint discrimination" and requires the religious-backed centers to provide potential clients with a "false and/or misleading message about services they do not provide." Failure to post the notice is a class C misdemeanor, punishable by a fine of as much as $450; the Austin centers have not posted the signs, according to the lawsuit, and none have faced any sanction for not doing so.

The centers' services – pregnancy testing, counseling, and other assistance to expectant mothers – are free, and the centers are not engaged in "commercial speech," the lawsuit notes, but are "motivated by social, charitable, and religious concerns."

The ordinance does not place a similar burden on other providers, the suit notes (although this isn't entirely accurate because state law does require abortion providers to post notice regarding their businesses along with licensing numbers and information on how to contact the state with complaints). Being required to post the signs would "substantially burden their religious ministries," the suit reads. The ordinance "unconstitutionally seeks to suppress unpopular ideas and information relating to pregnancy, and to manipulate the public debate by attempting to dissuade women from hearing pregnancy information from a religious perspective."

City Council unanimously passed the Bill Spelman-sponsored ordinance in April 2010. The point, he said at the time, was to ensure that the limited-service centers "disclose what is factual and true about the services they offer." A similar ordinance was passed in Baltimore in late 2009, and earlier this year a federal judge in Maryland enjoined the city's ordinance, writing in a January opinion that it violates the free speech provisions of the First Amendment. 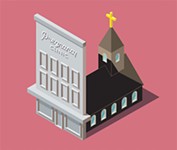