Will Obama give oil pipeline the green light? 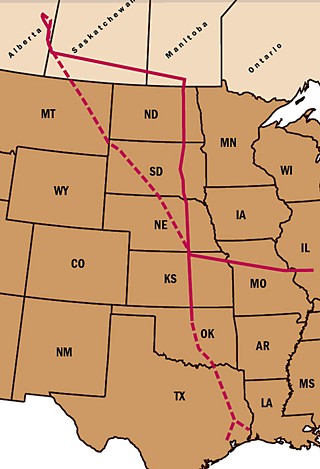 This map shows both the existing Keystone (Phases I & II) tar sands pipeline (solid line) and the proposed Keystone XL pipeline (dotted line) currently under review by the U.S. Department of State and the subject of last week's public hearing in Austin.

With a White House that ardently endorses green energy and a coast still recovering from the worst offshore oil spill in history, it might seem inconceivable that the U.S. would allow the construction of a new, major oil pipeline stretching from Montana to Texas. Yet that's what appears to be happening, as the proposed 1,700-mile Keystone XL pipeline is well on its way to reality. If approved, it would carry as much as 830,000 barrels of crude oil per day from Alberta, Canada, to refineries in Oklahoma and along the Texas Gulf Coast. The proposed route snakes through East Texas and over part of the Carrizo-Wilcox Aquifer, which supplies drinking water to 60 Texas counties.

On Aug. 26, operator TransCanada stepped closer to securing a presidential permit to build the pipeline when the U.S. Department of State – charged with determining whether the project is "in the national interest" – released its final envi­ronmental impact statement, which concludes that the pipeline will not have a significant negative impact on the environment in the six U.S. states it would cross.

Last week, supporters and opponents of the project gathered at the Lyndon Baines Johnson Library auditorium to comment on the EIS during a public hearing held by the Department of State, which is tasked with reviewing the permit because the pipeline would cross an international border. In making its decision, the department must consider the project's environmental and safety impacts, social and economic concerns, as well as any foreign policy aspects. It will recommend granting or denying the permit after a 90-day comment period on the EIS ends Oct. 9.

About 200 people turned out for the hearing, unfolding a classic jobs-vs.-environment drama. Half the crowd wore bright-chartreuse T-shirts reading "Keystone XL Pipeline Means Jobs" or orange polo shirts sporting the Laborers' International Union of North America logo. The union, along with a handful of elected officials in attendance, support the pipeline for the economic growth and the 20,000 new jobs TransCanada has promised – although opponents charge the company has greatly exaggerated the project's benefits.

"The Keystone XL pipeline would fortify our energy supply, grow our economy, and put thousands of people to work," said Gregory Parker, a Comal County commissioner. The project, he said, would pour $1.6 billion into the Texas economy and cost taxpayers nothing. "This is exactly the kind of economic boost that the federal government tried to do with the stimulus."

The other half of the crowd opposed the project chiefly due to environmental concerns. Environmentalists object on two fronts: specific threats to local communities and water supplies should oil escape the pipeline, and the project's broader potential to accelerate global warming. They contend that the EIS is flawed and incomplete. "We are told that the pipeline will create new jobs, but it will also create new problems," said Amanda Yaira Robin­son, coordinator of Texas Interfaith Power & Light, which advocates on environmental matters. "Creating new jobs that create new suffering is not OK."

Numerous oil pipelines already crisscross the U.S., including the original Keystone pipeline. Keystone Phase I stretches 2,150 miles from Alberta to Illinois. Phase II branches from the main pipeline in Nebraska and runs 300 miles to Oklahoma. TransCanada's pipelines, environmentalists say, are particularly insidious because they carry crude squeezed from oil sands (also called tar sands), sandy soil laced with a heavy, tarlike substance called bitumen. The sands are strip-mined and processed to extract the bitumen, which is then diluted to produce a liquid synthetic crude oil. Canada has vast reserves of oil sands.

"Both synthetic crude oil and [bitumen] are similar in composition and quality to the crude oils currently transported in pipelines in the U.S. and being refined in Gulf Coast refineries," the EIS states – but environmentalists disagree. "If we have contamination events – which are going to occur, because these pipelines all leak – this is very dirty crude oil, because of the high sulfur levels, the heavy metals, the benzene," said Neil Carman, Clean Air Program director for the Lone Star Chapter of the Sierra Club. "You will not be able to drink water in East Texas that's been contaminated with this crude oil."

Indeed, just 16 months into operation, the Key­stone pipeline has racked up four accidents. "Pipeline oil spills are a very real concern, as we saw during the two pipeline spills in Michigan and Illinois last summer," states a June 6 letter from the U.S. Envi­ron­mental Protection Agency to the Department of State. "Just in the last month, the Keystone Pipeline experienced two leaks (in North Dakota and Kansas), one of which was brought to the company's attention by a local citizen."

There is also the darkening shadow of global warming. The Department of State acknowledges that unconventional crude of the sort destined for the proposed pipeline creates a larger carbon footprint than conventional hydrocarbons. Oil sand crude production consumes more energy than conventional methods; moreover, oil sand mining in Canada requires clear-cutting forests, thereby simultaneously reducing global carbon sequestration. According to a July report by Environment Canada, the country's environmental ministry, greenhouse emissions from bitumen production are expected to increase by one-third between 2005 and 2020.

Nonetheless, with high unemployment, a stagnating economy, and the campaign season in full swing, thousands of jobs will be hard to ignore – a thought not lost on state Rep. James White, R-Hillister, who endorsed the pipeline. "You need this as much as we do," he told Department of State reps at last week's hearing. "Take it straight to the White House."

The comment period for the Keystone XL Environmental Impact Statement ends Oct. 9. Email written to keystonexl-nid@cardno.com or fax to 206/269-0098. The Department of State's EIS and related documents are posted with this story online, and the official website is www.keystonepipeline-xl.state.gov. For more on tar sands pipelines, see www.nwf.org/tarsands, and www.tarsandsaction.org.