How Green Is Our Austin? 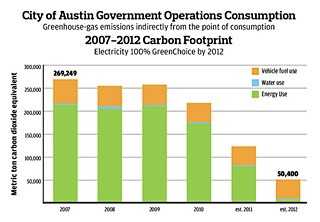 The city's carbon footprint has inched downward ever so slowly since 2007, showing its greatest progress in 2010. If projections hold for 2011 and 2012 under the 100% GreenChoice commitment, Austin truly will be a green star on the national map. (The projections do not include Austin Energy power plants or its FM 812 landfill, the former site of the city's solid waste facility.) AE's next goal is to move the city's fleet to electric vehicles by 2020.

After years of lagging behind on its 2007 vow to blaze a national path to climate protection, the city of Austin is putting its money where its mouth is and fulfilling a mission to move all city-owned facilities to renewable energy by 2012. With the start of the new budget cycle on Saturday, Oct. 1, muni­cipal departments will begin purchasing 100% of their electricity through Austin Energy's GreenChoice program. That's quite a leap from last year – or last week, for that matter – when the municipality was buying less than 20% of its power from renewables.

The changeover transfers about 300 city accounts – roughly 280 million kilowatt-hours annually – under the GreenChoice umbrella, bringing the overall total to about 360 million kwh annually drawing electricity from renewable energy supplies, according to Austin Energy and the city's Climate Protection Program. The total GreenChoice endeavor gives Austin the distinction of being the only large city in the U.S. that buys 100% of its electricity from green energy sources.

The city's giant leap forward won't be cheap – about $6.9 million annually. The price alone may explain why City Council passed the budget measure with zero fanfare, but it nevertheless puts Mayor Lee Leffingwell in good stead for his 2012 re-election bid because he was a prominent co-sponsor of the 2007 resolution introduced by then-Mayor Will Wynn. While council as a whole was silent on its full-tilt transition to renewables, Council member and renewable energy ally Chris Riley did not hesitate to applaud the move when asked to comment. "Austin has carved out a role as a worldwide leader in environmental protection, and reducing our emissions is a critical part of that role," said Riley, who was out of town this week and responded by email. "Full participation in GreenChoice sets a positive standard for our community, and keeps us on track toward achieving a 100 percent reduction of our emissions by 2020."

When the Chronicle reviewed the Austin Climate Protection Plan a year ago (see "Slow Burn," Sept. 24, 2010), the program – managed within AE – was struggling to move forward on an ambitious set of initiatives. At the same time, the city was creating a new Office of Sustainability, where a climate protection program would presumably be better suited. The program is now a coordinated effort between the two departments, although AE is still the public face of the effort.

"I can't find another city that's 100 percent green, with the exception of Santa Monica, California, and their population is less than 90,000," said Karl Rábago, vice president for distributed energy services at AE. Rábago said he started checking the marketplace about nine months ago to figure out whether it really would be a good deal for the city to move to GreenChoice. At that time, the three wind farm contracts that the city recently approved and which come online in late 2012 were barely a glimmer on AE's radar. The utility first looked to its business customers to see if they would be willing to lock in a 5.7-cent GreenChoice cost on a 10-year contract; for many, the answer was an immediate yes. With that, Rábago started looking at the same deal's potential impact on city departments. "We took [the idea] to the city manager and his team and briefed them on it," he recalled, "and from time to time we'd get questions from them, and we kept it going, and at some point the city manager made the decision to direct his departments to put [GreenChoice] in their budgets. We'll be putting all those [city municipal] customers on a 10-year contract, meaning a major part of running city government will now be under stable pricing for their electricity."

With GreenChoice's current Batch 6 rate of 5.7 cents scheduled to expire Dec. 13, 2014, Rábago will return to council within the next month to secure approval to extend the contracts for new and existing Batch 6 subscribers for both business and residential customers. The renewable energy program will have its biggest impact on the city's major electricity users – Austin Water tops the list because of the power required to move water. On the other end of the scale, the Austin Convention Center will continue reaping the benefits of a cheaper GreenChoice rate as it was one of the early partners of the city's 11-year-old program. "They've been on green power for a while because of the competitive aspect of trying to attract conferences," Rábago said.

He also acknowledged that the city's move to 100% GreenChoice was prodded along by local environmentalists, particularly Paul Robbins, who has bird-dogged the program since its inception. "That's Paul's job," Rábago said with a laugh. "We've got this great, long-term base of community support behind this program. I think it's a huge step of responsibility," he went on. "The resolution said we were supposed to be a leader ... and this certainly sets down the marker."

Even Robbins – a frequent City Hall critic – expressed unabashed enthusiasm about the move to renewables. "Austin always talks a good game about how environmental it is, but a lot of it is hype," he said. "Now Austin really is a leader again."

What You're Paying For
A bill comparison between GreenChoicers and nonsubscribers