When it comes to water, Augustine is no saint 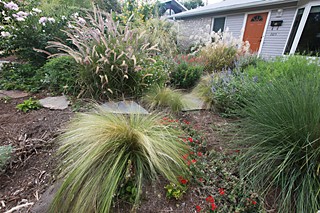 This South Austin homeowner opted for native plants instead of grass of any variety. (Photo by Jana Birchum)

With Austin five years and counting into a drought, it can be galling to watch water being sprayed on dying lawns. Now Austin Water has launched a new campaign to get homeowners and businesses to kill off their water-guzzling Saint Augustine grass – not a war on lawns, but rather an offensive against particular kinds of grass.

Through Oct. 14, the utility is offering a cash incentive: $10 for every 100 square feet of lawn that a homeowner allows to die off and, after the drought ends, replant with other varieties of grass – like buffalo or Bermuda – that need little or no watering. By turning off the sprinklers, customers will reduce their load on the water system. And by waiting until the drought ends to replant, the new turf will have a better chance of rooting properly. AW Conservation Division Manager Drema Gross said, "For those customers that are still struggling and trying to keep lawns alive on our restricted schedule in this incredible heat, we want them to stop watering."

This is not full-blown xeriscaping, where traditional gardens that depend on extra irrigation are replaced with drought-resistant native plants and bushes. Austin Water is already piloting a program for that: For the last year, the utility's conservation program has offered landscape conversion incentives, where homeowners can receive a $20 rebate per 100 square feet of lawn "converted to a native bed" and $30 "if the area will not receive any supplemental irrigation." Gross said: "Our current program does not let you replace turf with turf. We encourage native plants in nonirrigated areas, and yet we know there's a bunch of customers who, for whatever reason, are really attached to their turf lawns."

Gross described this latest lawn exchange program as being "for people who've been putting a lot of excess water on their landscapes." Because very few domestic customers have separate metering for their houses and yards, AW is not making hard and fast predictions about how much water can be saved through this program. But local water usage rises over 50% between winter and summer, and most of that is attributed to outdoor activities, especially extra lawn watering. In part, that is due to people accidentally overwatering. "We find a lot of people do not know how to operate their irrigation controllers," Gross said. "We have people who are convinced that they are only running one program, and then you find three or four that are all running in the middle of the night and no one knows." Homeowners can also conserve cash by aligning sprinkler heads correctly and checking their pressure settings: If the water is coming out in a thin mist, Gross said, "Those tiny, tiny droplets are not getting to your plants."

This new initiative will be open to anyone prepared to let their lawn die, or anyone who has already given up that fight and will commit to the conversion. However, Gross said, if a yard is doing well on the city's recently enacted one-day-a-week watering schedule, "We wouldn't necessarily recommend ripping that out." In fact, those kinds of low-usage gardens could be the poster children for the utility's long-term plans. Gross said: "Once the drought is over and we give everyone the green light to start planting new stuff, we hope to see a culture change in Austin in terms of what kinds of landscaping you see as you drive around town. The result is landscape that needs less water and is better able to survive the next drought without extreme measures."

Austin is far from the first city to launch a "grass for cash" program. California's North Marin Water District launched its first pilot program in 1989, and many cities have followed suit. Las Vegas has one of the most successful programs, which has been running since 1999. The terms offered by the Southern Nevada Water Authority are more generous than those proposed by AW: $150 per 100 square feet for the first 5,000 feet (as opposed to Austin' $20 to $30), then $1 per foot up to a maximum of $300,000. Participating property owners sign a covenant to maintain the conversion. Nicole Lise, public information coordinator for the SNWA, says it's "an effort by all our local water providers ... to confront the issue that we live in a desert. ... Luckily, our leadership was able to have the foresight to say that we need to be conserving more."

In total, more than 3,500 acres have been converted, saving a total of 50 billion gallons of water since 1999. While the average conversion is a home lawn between 1,500 and 3,000 square feet, more than 39.2 million square feet – 900 acres – of nonplaying areas of golf courses have been xeriscaped, saving 2.1 billion gallons of water a year. Combined with other water conservation programs, like lawn size restrictions for new properties and onsite water recycling for car washes, the end result has been dramatic. Between 2002 and 2010, annual water consumption within the Nevada authority dropped by 32 billion gallons "and that's in spite of growing 400,000 people," Lise said.

A restricted water supply and a rapidly expanding population? Las Vegas' problems sound an awful lot like those facing Austin. The sheer scarcity of water in Nevada and the permanent drought conditions have made it easy for customers to make sense of lawn conversion. Gross said, "Here, we're going to try to make it make more sense."

For more details on the lawn remodel option and the landscape conversion incentives, visit www.waterwiseaustin.org or call 974-2199.

Then There's This: The Irony of Conservation
Austin's water-saving habits will delay need for WTP4