The plague of wildfires reflect conditions beyond a temporary drought 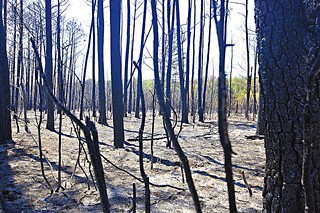 There is little doubt that the recent Central Texas fires have left deep scars on the ecology and air quality of the region. And environmentalists warn that, beyond the immediate destruction and pollution, the wildfires and the drought that led to them are dramatic symptoms of global climate change and could signal a feedback loop that helps accelerate the process.

Austin has persistent trouble with its air quality, much of it due to climate-change gasses like ozone, carbon dioxide, and nitrogen dioxide, and that situation has been exacerbated by the fires. When measuring air quality for particle pollution like soot from fires, the Texas Commission on Envi­ron­mental Quality most closely monitors what are called PM-2.5 – airborne particles less than 2.5 micrometers in diameter – and rates their density on a scale stretching from green for good to maroon for hazardous. Accord­ing to TCEQ media relations manager Terry Clawson, even during the worst of the blaze, when smoke was clearly visible in Central Austin neighborhoods, "It got up into the yellow range a little bit, but we did not see any big health issues around the state."

Ironically, the scorching temperatures and tinderbox conditions that led to the polluting fires have also meant that Austin has seen fewer spikes in its ozone pollution levels. In a typical year, Austin Climate Protection Program coordinator Pharr Andrews would expect to see between 30 and 40 ozone warning days. So far in 2011, she said, "we have 10 ozone watch days called by TCEQ, so I guess overall this has been a pretty mild season." While Andrews said she hoped that people responding to pollution education has helped cut that total, atmospheric chemistry plays a role. Ozone is a secondary pollutant, formed by exposing nitrogen dioxide from engines and power plants to sunlight. That happens fastest below 99 degrees, so the 84 triple-digit days so far this year have meant less ground-level ozone. That's not a cause for celebration; the original pollutants are still there, but will not factor into the ozone statistics. The federal maximum ozone standard for air quality is 75 parts per billion. Andrews said, "At the moment we're at 74 parts per billion, so we're right on the edge," and the fires have worsened the situation. On Sept. 7, Andrews said, "we experienced a very high rate of 86 parts per billion. That was pretty substantial for our area."

The standards for pollution measurement are set at the federal level, and environmental groups are deeply concerned that the Obama administration is backpedaling just as the impact of climate change is at its most profound. On Sept. 2, just before the latest fires, the White House announced it would not introduce new Ozone National Ambient Air Quality Stan­dards and instructed the Environ­mental Protection Agency to wait on an updated scientific review that's due in 2013. The decision has been roundly condemned by environmental groups, but Clawson issued a statement for TCEQ saying that "the EPA is beginning to consider science and common sense in their decisions."

That attitude concerns Neil Carman, director of the Clean Air Program for Lone Star Chapter of the Sierra Club. He argues that "Governor Perry, the TCEQ, the Public Utility Commission [of Texas], the Electric Reliability Council [of Texas], these agencies are in grave denial of the science." Texas is "ground zero for climate change in the U.S.," and the fires are just one more piece of evidence: "What we have is a continuing drought pattern, and then with the hotter summers, it's getting worse." If the last two years are any measure, the problem is accelerating. The sheer scale and ferocity of the Bastrop fire has overshadowed the fact that this has been an unprecedented year statewide, with major blazes near Fort Worth in April and staff at Fort Hood fighting a series of major burns on their practice ranges since mid-August. In 2010, the state lost a record 1.8 million acres to the flames. This year, Carman said, "we went through that by the end of May, and June, July, August, we doubled that." Long term, he argued, the biggest challenge is fitting these immediate catastrophes into the larger battle of global climate change. If this is the new normal, then Texas better get used to being a wildfire state. When the next fires come, Carman said, "The question is: Is the drought the cause, or is the drought caused by climate change?"

Once the fires die down, the question may be whether the drought, the fires, and the woodland and grassland lost to both have created a feedback loop for climate change. "That's another bit of the equation," said Carman. "We're losing forests, we're losing agricultural crop production," and that vegetation, especially evergreens like Bastrop State Park's pine trees, played a key role in sequestering carbon-dioxide emissions from the industrial and energy sectors – a particular problem for Texas, which is so heavily dependent on coal-fired power plants. Concluded Carman, "When you're losing whole forests overnight, that's really bad."