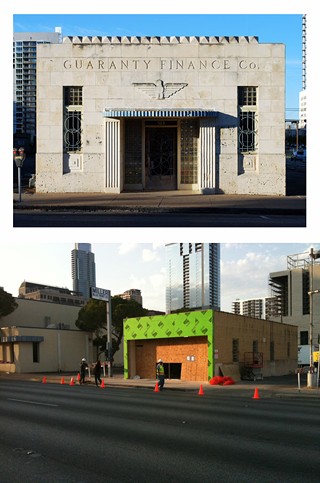 The charming art-deco facade of this former Guaranty Finance building at 513 W. Sixth has been removed, much to the horror of daily passersby and preservationists. Even the city's go-to officials for all things historic were caught off guard; Deputy Historic Preservation Officer Alyson McGee says her office didn't learn of the facade's removal until after the fact. Typically, the permitting process for any building more than 50 years old slated for demolition or remodel goes through her office, she says. This one, which received a remodel permit for a new commercial business, somehow fell through the cracks.

While the building, built in 1946, is not a designated historic landmark, McGee says she would have preferred the option of pursuing such a designation. She says her office spoke to the building's owner, Miller Blueprint's Luci Miller, who assured her that the facade had been carefully dismantled and a quarry company had been enlisted for restorative work. The facade will ultimately find a new home on a nearby building, McGee was told.