Obama drops the ball on jobs, and Glenn Beck moves to the suburbs

Get ready – President Obama says he is now ready to "pivot" to that nagging issue of American joblessness!

Pivot? How about focusing on it relentlessly, even (dare I say it?) presidentially? After all, our economy is in the ditch, not because of government deficits, but because of our deficit in good, middle-class jobs. It's way past time, Mr. President, for you to put on your FDR hat and get cracking on a real jobs program.

So, what does Obama's pivot amount to? "There are things," he recently said, "that Congress could do right now that will help create good jobs." And – cue the trumpets – those things are: first, pass more free-trade agreements, and, second, overhaul the patent laws!

What, you expected boldness?

This is pathetic. We already have a mess of free-trade scams, and they've led to job losses for America. Patent reform? Any jobs that might come from that are years down the road – are people just supposed to sit still and wait? These proposals are nothing but more trickle-down economic tinkering, not a jobs program. They make Obama seem not only small but ridiculous.

He wasted a ton of political capital on his senseless debt-ceiling deal with ideological know-nothings in the Republican House when the American people were crying out consistently and emphatically that the issue is jobs, jobs, jobs, and more jobs. Labor Day is coming up. What better time to propose a national recovery program that would hire millions of people to go to work on infrastructure and green-energy projects that America urgently needs? Put something real on the table, let the right-wing Koch-heads howl against it, then go to the countryside à la Harry Truman and hammer them with their own know-nothing do-nothingism.

The people are waiting. Do they have a president or not?

A bit of news has come my way, and all I can say is: Help!

The news is that Glenn Beck, the weepy wizard of talk show weirdness, has moved to Dallas. Come on – we Texans have enough of a burden as home base for such right-wing, corporate-hugging politicos as George W. Bush and our presidential wannabe, Gov. Rick "Supercuts" Perry. Adding Beck is piling on!

Actually, he didn't move to Dallas. Instead, Beck (who claims to be the voice of the little man) has pitched his tent in Westlake, a little-known burg west and north of the vibrant city. As the saying goes, it takes a village to raise a child, but apparently it takes a gated and guarded enclave of ritzy multimillion-dollar mansions to satisfy Beck and others in the rich-and-famous crowd. That's what Westlake is – a bastion of secluded and secured luxury for about 1,000 superrich people. It was recently named by Forbes magazine as the most affluent neighborhood in the country. For example, Beck's little domicile in this ghetto of the privileged goes for more than $5 million, though it can be leased for a mere $20,000 a month.

And, since he has been dumped from Fox TV's lineup of hard-right yakkers, Beck might only have a month-to-month passport for this wonderland of CEOs, sports stars, and the like. Indeed, some homes there are big enough to have their own ZIP codes, with red-tile roofs that cost more than Beck's entire abode.

Westlake is marketed to moneyed elites as a place where they can "just lead normal lives." Ah, yes – the normality of everyday multimillionaires huddled inside walls. "What's nice about living here is the freedom," said one resident. But it's an odd concept of "freedom" to lock yourself in a cage, albeit a gilded one. Especially if Glenn Beck is there with you! Point Austin: It's Accountability Time
Lloyd Doggett on the need for swift action on impeachment 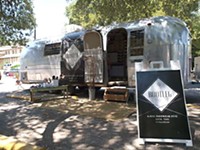 Halloween Mask Instructions
A-choo! Some guy just sneezed into his hand instead of the crook of his arm. Better get your mask on ...