After 25 years in prison, Michael Morton sees a glimmer of hope 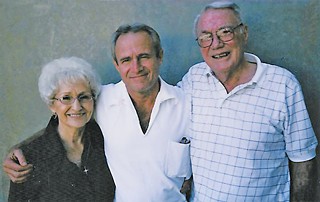 Michael Morton with his parents, Pat and Bill Morton (Photo courtesy of The Innocence Project)

The results of new DNA testing in an old murder case confirm that Michael Morton was not responsible for the slaying of his wife in Georgetown 25 years ago, lawyers for Morton argue in a new court filing. Moreover, the defense team alleges that exculpatory material known to police and prosecutors was deliberately withheld from Morton – information that, had it been made available at the time of Morton's 1987 trial, likely would have kept him from being sentenced to life in prison. Among those who knew about the evidence was William­son County District Attorney John Bradley, whom Morton's lawyers say later joined with the Williamson County Sheriff's Office to try to block the release of the investigative file when Morton's attorneys with the Innocence Project sought it in an open records request.

Bradley's obstruction of justice should, in part, cause the court to remove him from any additional involvement in the case, reads the Aug. 17 court filing. "Justice demands a rigorous and unbiased investigation into the true circumstances of Christine Morton's death, and an explanation as to how her grieving husband was wrongfully charged and convicted of the crime," it reads. "Because Mr. Bradley clearly cannot be expected to play that role, he should recuse himself from the matter immediately, or be recused by this Court."

At a hearing Tuesday, Judge Billy Ray Stubblefield denied the motion for Bradley's removal but said he wanted no foot-dragging in the investigation and set a Sept. 27 status hearing on the case.

Christine Morton was bludgeoned to death in her home in Georgetown in the early morning hours of Aug. 13, 1986. Although there was no evidence linking him to the crime – and although he had no criminal history or record of domestic violence – prosecutors quickly focused on Michael Morton. They posited at trial that Morton beat his wife to death because she was too tired to have sex with him after celebrating his 32nd birthday.

After killing his wife, prosecutors claimed, he then went to work by 6am that morning. Interestingly, the lead investigator on the case, Don Wood (then a sergeant with the Williamson County Sheriff's Office), never testified at trial – a circumstance police say is highly unusual. Morton's lawyers now say they believe they know why: Contained in the investigative file is evidence that Michael was not guilty. The startling revelation came in the form of a story that the couple's son, Eric, then 3 years old, told his maternal grandmother 11 days after the murder, a story that she passed on to Wood. "Where was Daddy, Eric?" Christine's mother had asked her grandson, according to excerpts from a transcript of a call to Wood that is contained in last week's filing. "Was Daddy there?" "No," Eric had replied. "Mommie and Eric was there."

Apparently that information – along with several other tips provided to police in the days after the murder – was never disclosed to the defense. In 1987, Morton was convicted and sentenced to life in prison. He has maintained his innocence, however, and has sought to have evidence found at a nearby half-abandoned construction site subjected to DNA testing. The results of that testing, only recently delivered to the defense, revealed that Christine Mor­ton's blood and hair were on a red bandana, commingled with the blood of a man who was not Michael Morton. When the DNA profile was run through a national database by the Texas Department of Public Safety, it came back with a match to a man in California. This, Morton's attorneys say, is proof positive that Michael Morton did not kill his wife.

Whether this will be enough to exonerate Morton remains to be seen. His attorneys are asking for Bradley's removal from the case and a special prosecutor appointed to reopen the investigation into the murder – as well as the circumstances leading to what they say is Morton's wrongful conviction.

According to the filing, Bradley fought against Morton's attempts to have the DNA testing performed, even after the defense team offered to do so at its own expense. Moreover, they say, Bradley personally involved himself in an effort to block the team's access to Wood's investigative file, which contained details of Eric's story of the crime – a story that meshed with physical evidence found at the scene. Morton's lawyers say Bradley was aware the information was in the file, and not only did he not come forward with the information, he also actively fought against its release, according to the filing. At press time, Bradley had not responded to our request for comment. But in a response filed Aug. 23, Williamson County Assistant District Attorney Kristen Jernigan writes that the allegations against Bradley are based only on "unsubstantiated allegations and personal attacks." Jernigan also wrote that Bradley has had very little direct involvement in the Morton case and he was not the one to make the decision to seek a ruling from the A.G. in an attempt to keep the investigative file out of the hands of Morton's attorneys.

In fact, Jernigan argues in her response that the D.A.'s office wasn't aware that a match had been found to the DNA on the bandana until the Innocence Project filed its recusal motion last week. As soon as the office learned a match had been found, it began a thorough investigation into the identity of the California man – to include his whereabouts in August 1986. That information needs vetting first, "before any conclusion can be drawn as to its value as evidence of [Morton's] guilt or innocence."

The lawyers from the Innocence Proj­ect suggest that Bradley's personal animosity toward them – displayed many times during Bradley's short-lived tenure as chair of the state Forensic Science Commission during its review of the fire science used in the Cameron Todd Willingham case – makes it clear that Bradley cannot consider the Morton case without bias. "Having repeatedly cast himself as a bulwark against what he perceives as the 'agenda' and 'outside interests' of the Innocence Project, it is inconceivable that he will be able to dispassionately and fairly evaluate the evidence of Mr. Morton's guilt," they wrote. 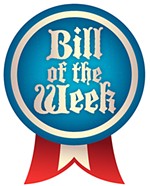