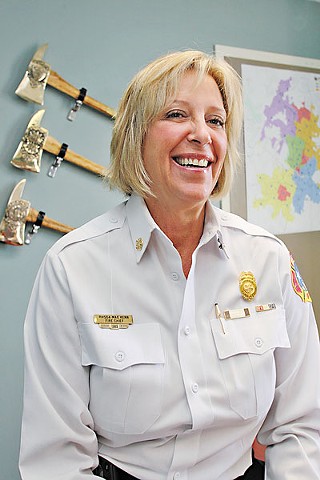 In the process of negotiating an agreement, Austin Firefighters Association President Bob Nicks (below) says he and Fire Chief Rhoda Mae Kerr (above) have mended bad feelings between the department and the union. (Photo by Jana Birchum)

More than a week after an arbitrator ruled in favor of the Austin Firefighters Association in its grievance against the Austin Fire Department, the leaders of those two groups are still in private negotiations over just what that ruling means.

In a decision announced Aug. 16, arbitrator Don Williams wrote that the department had violated the union's collective-bargaining agreement by making the cognitive ability and behavioral portions of the entry-level cadet hiring exam pass/fail rather than scored. AFD officials claimed they had done so to reduce the test's adverse impact on minority applicants, but union President Bob Nicks and other union officials said the move lowered the test's validity – its ability to determine highly qualified candidates – in the name of increasing ethnic diversity in the department. Williams agreed with Nicks and ordered the department to stop using any hiring process that doesn't grade the cognitive/behavioral portion (the so-called National Firefighter Selection Inventory) as part of candidates' composite scores.

Since then, Nicks and Fire Chief Rhoda Mae Kerr have been hashing out the details of Williams' decision, trying, Nicks told the Chronicle, to "negotiate things better, not just for this exam but for all upcoming exams. We're working together to come up with a process that both predicts quality candidates and reduces adverse impact." 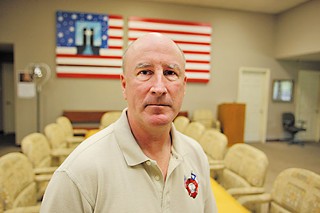 Outside those discussions, the wheels are already in motion to move the hiring process along. Last Friday, the department reordered the cadet candidates' rankings to account for the new scoring formula. Only the top 150 of the more than 1,500 applicants who took the test will move forward in the process, so most likely some unlucky souls who went to bed last Thursday night thinking they were on their way to becoming firefighters woke up Friday morning to unpleasant news: "Sorry pal, turns out we can't use you." For those new lucky 150, this week has meant three-hour written psychological exams, to be followed by physicals at the end of the month and interviews with a psychologist in October.

Meanwhile, both Nicks and an AFD spokesperson said that the two parties had agreed to hold off on communicating with the press until terms are in writing, after which, Nicks said, they will "coordinate communication." AFD Public Information Manager Mich­elle DeCrane did tell the Chronicle that the department "has every intention of complying with the arbitrator's decision, and negotiating the terms of that decision is the best way to do that."

Nicks said he has been encouraged by his discussions with Kerr thus far and is very pleased with the process. He even said he and Kerr had mended the bad feelings between them and their respective organizations, which, he said, is remarkable "considering how it's been."

"We're very close to an agreement," Nicks said. "We've come to an agreement verbally on most of the issues; now we just have to get them written down." Nicks anticipates being through with the negotiations within a week or so. After that, he'll take the finished agreement to union members for their approval. Provided nothing goes wrong, AFD may have its newest cadet academy class ready to go within a few months.

Which was always the point, says Nicks: getting more qualified firefighters out on the street quickly. After all the talk about validity and adverse impact and integrity inventories and ethnic diversity and a department that looks like the city it serves has quieted down, and once the department gets down to the business of training its newest recruits, Nicks believes the city will be better off for the union having filed its grievance.

"Once this process is done, the citizens of Austin will have better firefighters," he says, "which is the most important thing."