The Doctor Is In – Then Out

Physician says she was fired for speaking out against bad management 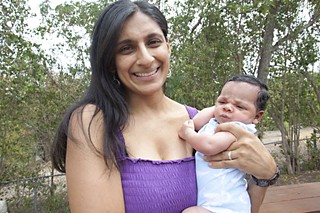 Dr. Amina Haji, with newborn son Ayo Krishna, says she was fired from CommUnityCare for speaking out against poor management practices that began when the health care organization moved from under the auspices of the city to become its own nonprofit. (Photo by Jana Birchum)

On May 18, Dr. Amina Haji, a physician with CommUnityCare, the corporate health clinic system overseen by Central Health, received a termination letter from Dr. David Escamilla, the group's acting chief medical officer. At the time, Haji had been with the organization for five years and was 34 weeks pregnant. In the letter, Escamilla referenced repeated policy violations related to confidentiality as well as insubordination. A week before the letter was sent, Haji had been moved to the Northeast clinic from the Rosewood Zaragoza clinic ("abruptly moved," claims Haji), where she had been the lead provider since 2010, but even after Haji's arrival at Northeast, Escamilla claimed, violations continued to occur.

Escamilla wrote that Haji had violated CommUnityCare's attendance policy by being late to meet a patient, its insubordination policy by discussing personnel issues regarding a nurse assistant at the Rosewood clinic, and its code of conduct by stating loudly, "There's a fire in the building," which, though apparently spoken in jest, was taken seriously by several of Haji's co-workers and caused them to fear for their safety. "Based on the continued policy violations," Escamilla wrote in closing, "particularly so close in proximity to your transfer to a new clinic, I am not confident that you have taken my previous direction seriously and will improve your conduct."

On the surface, this story doesn't seem like much: just a woman fired from her job for a number of reported performance failures or character flaws. But this case could turn out to be significant for two reasons: 1) because Haji claims she was fired not for her performance but because she had been making noise for years about poor management at CommUnityCare and 2) because CommUni­tyCare gets a large portion of its funding from tax dollars, and, according to Haji, her termination is yet more evidence that those tax dollars are being wasted.

"I'm fairly vocal about what's happening in the organization, mostly in terms of management and the way providers and staff are treated," Haji told the Chronicle recently. "I was trying to make improvements in our clinic, trying to improve patient care. It felt to me like the organization really wanted the status quo, didn't want to make changes. I had taken my concerns from the clinic management level to the upper level of management, and I feel like that's where the message came that I needed to be fired. It was a silencing mechanism; they were trying to push me out the door."

Seventeen days before her termination, Haji had sent an open letter to CommUnity­Care detailing the problems she believed the organization was experiencing in terms of provider retention, patient care, and poor personnel infrastructure, all stemming from the fact, she wrote, that the clinics are run by business people, not medical professionals. "Providers are viewed as the income generators of our organization with a minimal role in systems design, clinical operations, and management," she wrote.

Haji claims the management at CommUni­ty­Care had a problem with her ever since the Community Health Centers moved from under the auspices of the city to become its own nonprofit. She says she became, in their eyes, the face of a movement by providers to secure better working conditions – a Norma Rae for the indigent-care set. (She has also been active in supporting a single-payer health care system, through Health Care for All – Texas.)

"When we moved from the city of Austin to CommUnityCare, we were losing our pension," Haji says. "Under the city of Austin, we had about 35 percent below-market salaries, but we had a pension and 12 federal holidays and a generous time-off policy. When we moved to CommUnityCare, we were losing our pension but still staying at 35 percent below market and [having] fewer days off. At that time, almost three years ago, I organized, along with another physician, all of the providers. All 32 signed a letter saying, 'We're not moving from the city to CommUnityCare unless we have an adequate compensation package: either a pension or you raise our salaries.'"

Today, Haji says, Comm­UnityCare is having trouble retaining its medical providers due to poor management, and it terminates them too quickly and without proper cause, resulting in a situation in which there aren't enough medical professionals to help indigent patients – eventually meaning Travis County tax dollars are going to waste.

"CommUnityCare, as the recipient of about 90 percent of the dollars coming out of Central Health, the county tax base, has to be accountable for the money it's receiving," says Haji.* "And it can't figure out how to treat its providers and clinical staff and how to retain them. Indigent patients are not getting their money's worth. Not retaining providers is a huge part of that because you don't have anybody to provide the care."

Haji's former colleagues at CommUni­ty­Care seem split on her termination. More than one told the Chronicle she had their full support, that CommUnityCare's code of conduct is arbitrarily enforced and its provider-retention record spotty. On the other hand, one colleague said Haji's firing was not only justified but long overdue, that she had created a hostile work environment during her time at CommUnityCare and had, consequently, driven off several good staff members. Everyone we spoke to, whether currently or formerly employed by CommUnityCare, refused to speak on the record, citing how small the medical community in Austin is and, by one account, "how far the hand of CommUnity­Care reaches."

According to CommUnityCare CEO David Vliet, who signed off on Escamilla's decision to fire Haji back in May (but who said he was unable to comment on the specifics of the personnel matter), the group's 20 clinics are "relatively fully staffed," and there has been no discernible problem with patient care or provider retention. "We face recruiting challenges because of supply and demand, which is not likely to get any better, and we have vacancies for providers," said Vliet. "But that's both because there is some natural turnover but also because we're opening a new facility on Braker Lane in North Austin in late fall. We have a pretty large-scale recruiting effort going on for providers."

*The story that appeared in the Aug. 19 print edition and an earlier online version incorrectly stated that CommUnityCare is expecting to treat 226,000 patients this year. Rather, they are expecting 226,000 visits this year from approximately 63,000 patients. The article also quotes Dr. Haji saying CommUnityCare is the recipient of 90% of the money coming out of Central Health. According to Ed Gomez, head of communications and community relations at CommUnityCare, in fiscal year 2011 CommUnityCare accounted for 32% of Central Health’s health care expenditures.