Solar and wind could do the job more efficiently, advocates say

Texas was in a power crunch last week, but Public Citizen's Tom "Smitty" Smith says that doesn't undercut environmentalists' calls to retire old coal-fueled power plants. He notes that solar (such as this installation on top of the city's Palmer Events Center) and wind farms work best when the temperatures spike. (Photo by John Anderson)

This past winter, Texas saw power blackouts during a cold snap that led to accusations – ultimately dismissed in state reports – of market manipulation à la the California Enron debacle more than a decade ago.

Could last week's heat-wave-induced power emergency be another such situation? Probably not, says Public Citizen's Tom "Smitty" Smith – but, he says, it does show problems with a deregulated power market.

"I think we're in an all-out heat stress situation," Smith says. However, "We think there are some simple solutions to it, and it shows, really, a significant underlying flaw in the deregulated market, which is that while we need to come up with a way to assure we can reward companies for building additional generating plants, in the deregulated market, most of the money is made on crises like this. And so there's an inherent bias toward creating crises so you can make $3,000 per megawatt hour [the state-mandated market cap] when the normal price is $30 to $60."

The current situation doesn't quite exhibit the extremes of the infamous Enron crime. During that crisis, energy traders took plants offline so that 28,000 megawatts of demand caused blackouts when there should have been capacity of 45,000 MW, or 45 gigawatts. But current demand in Texas is really pushing the limits. According to the Electric Reliability Coun­cil of Texas, our state's grid can't generate much more than 68 gigawatts, and Aug. 3 saw an all-time peak demand record of 68,294 megawatts. (One megawatt is enough to power about 200 air-conditioned homes during hot weather.) ERCOT did say some plants were offline – accounting for as much as 5,000 megawatts on Aug. 4 – due to forced outages or plants unable to run at full capacity. The state dealt with the problem by dropping "emergency interruptible loads" – meaning some large industrial users were shut down and compensated for the inconvenience – and requesting conservation measures from all electricity users between 3pm and 7pm each day.

The crisis would seem to do no favors for the efforts of Public Citizen and other environmental groups pushing to retire coal plants and replace them with clean, renewable energy, but Smith says just the opposite. "The coal plants are sort of the old dinosaurs of the generation industry and not particularly responsive," Smith says. "What we need now are the far more responsive combined cycled natural gas plants [which use the exhaust heat of one turbine to power another] and things that are responsive to and work best in hot situations like solar ... and coastal wind and other things that produce energy directly on peak as correlated to the amount of heat in the atmosphere."

In an Aug. 5 press release, ERCOT said that as much as 1,400 megawatts were generated by wind turbines in the coastal area. Coastal wind farms accounted for about 70% of wind generation during peak hours on Aug. 4, showing either that wind isn't enough or, conversely, that the state really needs to step up its support of the wind power industry.

Smith pointed out that San Antonio wants to retire its oldest coal plant and replace it with a combination of efficiency: a new natural gas plant and 400 megawatts of solar generation.

He also praised Austin – with its public utility monopoly sheltered from market deregulation – for its electrical load management. Many Austin Energy customers have electronic thermostats that allow the utility to remotely turn off home or business air conditioning for 10 minutes or so every half hour during peak demand.

The electronic thermostats have allowed Austin Energy to shed about 200 megawatts of demand during peak hours, Smith said. After three consecutive record-setting days, total peak demand fell off afterward. "They dropped their load ... simply by dispatching that technology. And if that were done across the state, home after home, business after business, we could have a profound impact on the amount of generation we need not only to build but also [to deal with] the kind of crises we're running into."

Smith said the Legislature told ERCOT to start working on similar programs statewide and said ERCOT should have a computer system ready to roll out in 2012, but it's "too late for crisis this summer. We could substantially increase the margin of error without building any additional plants if we did that more aggressively.

"Austin Energy was one of the first cities in the United States to really aggressively try to do this kind of load management, and days like this show how effective it is in preventing blackouts," Smith continued. "It's working, and it's demonstrably cheaper than burning coal or gas to make electricity.

"Now watch the whole system in Austin black out right after I get done telling you that," he laughed. "Knock on wood." 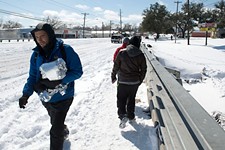