End of the Road for Baylor Street Art Wall? The owners of this property at Baylor and 11th streets are closing down a street art project, citing an overrun of graffiti artists and litter. (Photo by John Anderson)

"No Trespassing" signs and yellow barrier tape have gone up around the multicolored abandoned condo project at 11th and Baylor streets. Officially, the site is known as the Local to Global Outdoor Gallery Project, organized and curated by the HOPE campaign, a local nonprofit, with support from the property's owners, Dick Clark Architecture and Castle Hill Partners. Until last Tuesday, however, the walls just west of Lamar were better known unofficially as a great place for artists to paste or paint to their heart's content, rules be damned. It's this clashing – aesthetically, artistically and spatially – that has led to the clampdown along Baylor Street and has revealed a larger change in Austin's accepted aesthetic citywide.

"You missed the 16-foot trailer full of trash we hauled out of here. And that was without any brush, just garbage of every kind, some of it unmentionable," said a contractor, who was hired last week by the Baylor Street property owners to clear and cordon off the site. Seemingly more contentious was that the site's initial artwork – six enormous pastings by Shepard Fairey, whose Obey posters have in recent years become a ubiquitous part of popular culture – had been tagged with graffiti the previous weekend.

"You wouldn't go and paint over a Picas­so," said Dick Clark, co-owner of the Baylor Street site. Clark said he gave permission to the Outdoor Gallery Project earlier this year when he was approached by Andi Scull, the HOPE campaign's founder and executive director. "We had done similar work in Africa, and they came to me with everything together, so I told them [to] go ahead," said Clark.

It was in March, during this year's South by Southwest, that Scull and her then-fiancé donned work gloves to clear the cascading levels of unfinished concrete structures that form the site. "We were scraped up, bandaged, and bruised," remembers Scull. The Outdoor Gallery, which was intended to promote HOPE's mission to connect artists to global issues and the nonprofit's Sunday farmers' market on East Fifth, kicked off with Fairey's Obey posters and wall space dedicated to other artists.

As for all the graffiti appearing since then, "that was never supposed to be the case at all," says Scull, "though that is sort of the nature of street art." HOPE put up a sign with an explanation of the site's purpose, although it didn't explain that the walls were not blank canvases open to all comers. Clark and his partners have remained the only people clearly informing would-be contributors to the Baylor Street wall that they're not just breaking the rules but the law as well. "We've had many people arrested over the years, and we press charges," he says.

But the graffiti covering the original Obey pieces aren't just meaningless scribbles. Rather they're the marks of TCK, one of Austin's largest graffiti crews, says local photographer Rana Ghana, whose expansive Flickr photo pool covers the many tags, bombs, and crews of Austin's graffiti scene. On a recent afternoon deciphering the Baylor Street wall, Ghana explained that the graffiti covering the Obey posters are territorial expression. And it's these Austin graffiti crews' pieces, layered over Fairey's professionalized and highly commercialized posters, that literally paint a highly complex picture of the battle being fought over Austin's aesthetics. Fairey's art is rooted in a past steeped in property defacement, and he was the defendant in a vandalism case brought by the city of Boston in 2009.

It's ironic that the Baylor Street walls are the foundations of a would-be condo, stalled after a botched soil test decades ago and again recently when the housing bubble burst. Although, "it's very likely something will happen soon," Clark said.

Ghana says she can remember a time just a few years back when Austin's homegrown street art was supported by more businesses, and when the art did go up illicitly, it stayed for weeks. These days, it is almost immediately covered with gray paint, in a process known as buffing in graffiti circles.

You can't blame the street artists and graffitists for misunderstanding the Outdoor Gallery Project, which hinted at a free space for all, if only as a tease. You could blame the artists for thinking Austin is still willing to let its walls look anything but uniform, blank, and gray. Austin is one of a few places in the country where a land developer involved in African aid projects would let an influential nonprofit take over the walls of a stalled project and give it over to world-renowned street artists. But perhaps the city would be better served if misunderstandings between graffiti and street artists and nonprofit arts associations and landowners could be resolved. As Ghana sees it, "Every little thing that this city does to bring down this artistic element that makes Austin what it is, artists are gonna spray it up on a wall and make us think twice about what we think is right or wrong." 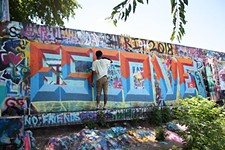 City to Crack Down on Graffiti?
Council to consider "vandalism" abatement program