Proposed plastic bag ban will be popular – and under assault

The sheer numbers are staggering.

According to the city's estimates, Austinites annually use 263 million single-use plastic bags – the sort we grab at checkout counters all across town – at a cost to the city of $850,000 for collection, litter control, landfill maintenance, and recycling contamination (they regularly jam the equipment). The visible litter is bad enough – there's scarcely a block in town entirely free of the plague – but there is no estimate available for the long-lasting environmental damage caused by the ubiquitous and nonbiodegradable throwaways.

According to a recent report in Rolling Stone, the figure for the whole country is 102 billion bags per year – a per capita average of 500. Worldwide, the usage estimate is 1 million per minute – that annual rate is too overwhelming to calculate, let alone contemplate. Like many such simple, individual consumer actions – who thinks twice about grabbing a bag or two? – on a global or even citywide scale, the cumulative negative effect is astounding.

The community backlash began some years ago, internationally and across the country, and Austin – after several years of trying voluntary methods – is the latest city to officially entertain a move toward an outright ban on the single-use plastic bags. Today (Thursday), City Council will consider a resolution, sponsored by Mayor Lee Leffingwell and Council Members Mike Martinez and Chris Riley, that would direct city staff to design a policy that over time would effectively ban the most common uses of the bags, to be formally considered for an ordinance later this year.

Leffingwell told me, "It's a pretty simple case" to make against the bags: the cost, the litter, the permanence in the landscape, the environmental consequences. And while Austin might be considered an early adopter, in fact we're a little behind the curve. Whole nations – China, India, Italy, Ireland – have begun adopting strong policies against the bags, so that (according to Rolling Stone's Kitt Doucette) 25% of the world's population now lives in regions with bans or prohibitive fees on the bags. The U.S. cities adopting some type of anti-bag policy include predictable ones like San Francisco; Portland, Ore.; Telluride, Colo.; and Santa Monica, Calif. Surpris­ing­ly, also prominent on the list is Brownsville, Texas, which enacted a ban in January and now has a half year of experience to share with other Texas cities. (Fort Stockton and South Padre Island will soon follow.)

"The city just looks much cleaner," Browns­ville public health coordinator Chris Hagg­strom told me this week. "Before, you'd find plastic bags everywhere, especially along the fence lines. Now, everything looks so much cleaner." Then-Mayor Pat Ahumada told The New York Times that the ordinance had eliminated 350,000 bags per day and "transformed our city." While a few people have complained of the initial inconvenience, Haggstrom said that overall, "We've had a very positive turnout. The public seems to like it a lot; the city's looking a lot cleaner." He said some out-of-towners are surprised to learn of the policy, but even then, "They're mostly pleased to hear it. ... There's been very little negative response at all."

There are specific exceptions for handling meat, fish, and some produce (to be anticipated in the Austin proposals), but the Browns­ville law also imposes standards on the next best alternative, paper bags – sturdy, with handles, to encourage reuse. The best choice is permanently reusable (e.g., canvas) bags, now readily available at most retailers. The city has even distributed reminder stickers for cars and refrigerators so consumers won't forget their reusable bags.

Leffingwell acknowledged the argument that paper bags are more expensive to produce – "and that's true, but they're also recyclable and in our single-stream program." In sum, he said, the city had done its "due diligence" and attempted a voluntary program working with major retailers, targeting at least a 50% reduction in usage. "It only came to 20 percent, and that's only with six retail chains – it just didn't make enough of a dent" in the citywide problem.

Leffingwell said he hasn't yet heard much vocal opposition – "One person emailed me that he'd left California to get away from this kind of thing" – but that's unlikely to remain the case. Retail chains nationwide have lobbied hard against bans, and the Texas Retailers Association, while cooperative with Austin's voluntary program, will almost certainly oppose an outright prohibition. Whole Foods, on the other hand, piloted a reusable bag program in Austin and now uses it worldwide.

Doucette describes well-funded and successful California and Oregon campaigns underwritten by the American Chemistry Council, and Austinites can soon expect to be hearing from industry front groups like the Progressive Bag Affiliates. If they can't win an impressionable audience at City Hall, they'll certainly be stopping at the Capitol, where legislation has already circulated that would effectively preempt municipal bans in favor of industry-friendly "recycling" programs – like Austin's first effort – that have already proven ineffective.

Sen. Troy Fraser, R-Horseshoe Bay, sponsored such a bill in this year's session, with a similar measure in the House, although both failed to make it to the floor. Fraser told the Times that he was hoping his bill would not only encourage recycling – by requiring major retailers to provide recycling programs – but would also reinforce a general public move toward reusable bags. He added that he "did not intend to overturn policies of cities with existing bans." But the text of his Senate Bill 908, which provides easy-to-meet exemptions even for the recycling requirement, includes the provision, "This chapter preempts a local ordinance or rule to the extent of any conflict with this chapter."

I anticipate that City Council will find a ready consensus for the ban, and that apart from some grumbling about particular uses (where to put my nonrecyclable garbage?), Austinites, like their Brownsville neighbors, will largely embrace the change.

But that's not likely to be the end of the story. Council's draft resolution asks staff to plan a "comprehensive phase-out" of the bags. Whatever they come up with, they should also prepare contingency plans for the counterattack certain to come from the plastics industry, with a considerable assist from the Lege. It won't be readily disposable. 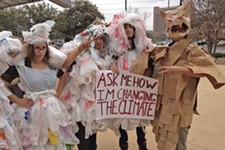 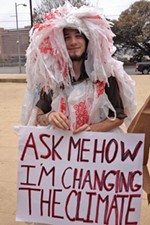 It's Official: Bring Your Own Bags
The long campaign to ban the bags comes to fruition 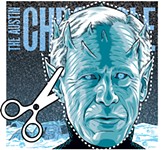