Tweet
print
write a letter
What do the Velveeta Room, Maggie Mae's, the Violet Crown Social Club, Clinical Pathology Laboratories, and the Domain (Simon Property Group) have in common? The Sixth Street comedy venue, the two bars, the medical lab, and the high-end, mixed-use retail development were all sued this week for alleged violations of the federal Americans With Disabilities Act. Partly to mark the July 26 anniversary of the ADA, ADAPT of Texas and the Texas Civil Rights Project filed lawsuits against 14 businesses in Austin and others across the state. "These cases underline unjust barriers in the daily lives of people with disabilities," TCRP attorney Joseph Berra said in a press release. Despite the longstanding law, Berra continued, "Some business owners refuse to come of age. People with disabilities still face serious barriers and discrimination on a daily basis and are repeatedly barred from fully participating in American life." Added ADAPT's David Wittie, "It's outrageous that more than two decades after the ADA became law we still must fight for our rights." The suits charge that the Sixth Street venues "have all chosen to maintain barriers to people with disabilities ... and none have ramps to provide access to their goods and services," as required under the ADA. The complaint against the Domain is that it "lacks accessible pedestrian routes from public transportation stops and features numerous barriers to accessibility." 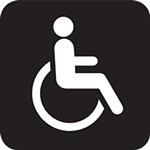