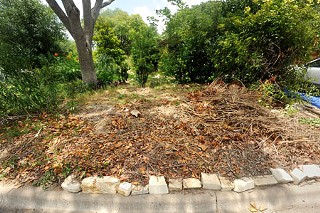 The results of "trimming" by Code Compliance (Photo by John Anderson)

The birds around Laura Croteau's Coronado Hills home may finally be able to breathe a sigh of relief. The real estate agent and founder of iconic Austin indie label Rabid Cat Records had been wrestling with the city's Code Compliance staff over her Wildlife Habitat-certified yard (see "From Shrub to Nub," July 8). She thought the fight had come to an end last month, when contractors with the Urban Forestry unit chopped down large photinia shrubbery and sprayed the area with herbicide. However, on July 7, she contacted the Chronicle again to say that staff from Code Compliance now wanted her to remove two large mountain laurels and a pair of rosemary bushes and were planning to put a "no parking" sign on her corner lot.

However, the code commandos have since backed down from that demand. Croteau had particular praise for staff with Council Member Chris Riley's office, whom she said had been really helpful. Riley's staff had been communicating with Code Compliance staff and were scheduled to meet with them again about Croteau's yard this week. The office of Mayor Lee Leffingwell, a strong supporter of the Wildlife Habitat program – which recognizes citizens who have taken the effort to provide habitats even in relatively small plots of ground – has also taken an interest in both this case and the current Code Compliance system. The process, which is driven by anonymous complaints (with the presumed intention of protecting complainants from retribution), is increasingly viewed as open to abuse in neighborhood feuds. Meanwhile, Croteau said she's received a lot of support from neighbors and well-wishers, some of whom have encouraged her to sue the city. That is something she will not consider, she said, adding, "I think the city has spent quite enough money on this stupid situation already."

However, Croteau still has to decide what to do with the area clear-cut last month. "Every time I walk out of my house," she said, "I have this big, brown, bare stretch next to my house." Because the work crew sprayed herbicide, she added, "anything I try to plant there will die." However, she's already replanting the rest of her yard to make sure it keeps its Wildlife Habitat status, adding a thicket of strawberry arbutus. Not only is it a low-water-use plant, she said, but "nine months out of the year, they have blossoms and fruits at the same time."