Seventy-nine percent of all allegations of misconduct made against police officers by colleagues inside the Austin Police Department were sustained by supervisors, according to the 2010 annual report released last week by Austin Police Monitor Margo Frasier. That number stands in stark contrast to the outcome of complaints made to the Police Monitor's Office by members of the public. Just 11% of the allegations made in so-called "external" complaints were sustained by the subject officer's chain of command.

Overall, the number of complaints made to the police monitor were down in 2010. Of nearly 1,500 contacts with the Monitor's Office – with most of those (1,270) initiated by the public – only 526 (35%) resulted in the filing of a complaint. Of that smaller group, just 89 ended in a "formal complaint." Formal complaints generally involve relatively serious allegations of misconduct and are investigated by the APD's Internal Affairs Division; the rest of the complaints were filed as "supervisory inquiry" cases, entering a less arduous track for having a complaint resolved, which involves the intervention of an officer's direct supervisor. (Supervisory inquiry cases can typically be resolved within 30 days, while formal complaints can take up to six months. The timeline difference may account for the larger number of supervisory inquiry cases, the report suggests.) 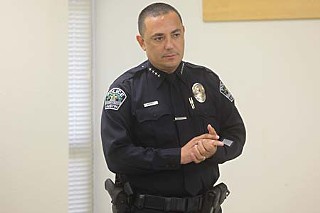 Overall, the report is a big-picture document suggesting areas in need of further inquiry, says Frasier. "My natural inquisitiveness is not to just look at a number, but to say, 'Why?'" The report notes many areas that warrant a deeper look by the Police Monitor's Office – including whether use-of-force reports are being adequately reviewed within the department (there were just 60 complaints involving use-of-force made last year by both officers and the public), and a look at why Austin's blacks are disproportionately filing complaints with the office as well as why blacks appear to be subjected to vehicle searches more often than whites. Indeed, according to the report, 35% of all external complaints were filed by blacks, even though they account for just 8% of the city's population.

This disparity is concerning, says Frasier, but the reason for the disparity isn't readily apparent – is it because blacks are suffering more abuses at the hands of police, for example, or is it perhaps because there has been successful outreach among the black community in terms of services provided by the Monitor's Office? In contrast, whites make up 50% of the population, but filed just 38% of complaints; Hispanics, who make up 35% of the population, were underrepresented, accounting for just 18% of complaints – another gap that Frasier says she'd like to know more about. (In that case, she wonders, could it be that the Police Monitor's Office has to do more outreach with the Hispanic and Spanish-speaking communities?)

Who Gets Searched and Why 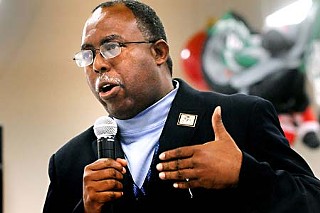 Moreover, the report notes that while blacks, whites, and Hispanics are subject to traffic stops at rates roughly proportional to the city's demographic makeup, blacks are nearly three times more likely than whites to be subject to a search once a stop is made; for Hispanics, that rate is just more than double that of whites. Yet, the rate at which police record a "hit" from a search – that is, incidents in which some contraband is found – is, again, roughly equal across demographic groups. Police record a 27% hit rate for whites, 28% for Hispanics, and 32% for blacks. "These numbers clearly show that searching Blacks/African Americans and Hispanics/Latinos more often does not yield a significantly higher hit rate," reads the report, "therefore, the practice seems futile and calls any justification of it into question."

Nelson Linder, president of the Austin chapter of the NAACP, applauded Frasier's willingness to shine more light on the police department. He said the findings of the report, specifically as they apply to black citizens, reflect a national trend. "These are institutional issues," he said, noting that the best place to implement change within APD and the law enforcement community in general is to start with the public officials who set policy. "We've got to go to the next level and start holding officials accountable at the City Council, the commissioners court, and the District Attorney's Office," he said. "Right now, there's no real commitment to social justice. There's lip service, but no enforcement."

Nevertheless, according to the APD's annual racial profiling report sent to City Council in March, the vast majority of all searches, regardless of race, are "non-consent" searches – those incidents in which officers have probable cause to search, for example, or when the search is made incident to an arrest. The number that deserves more scrutiny, says APD Chief Art Acevedo, is the number of "consent" searches – those requested by officers in lieu of probable cause to do so. Consent searches are ripe for abuse, and they can be used as "fishing" expeditions.

In Austin, it appears those types of searches are relatively infrequent, Acevedo notes. Indeed, of the more than 29,000 stops of black drivers in Austin in 2010, 4,356 ended in a search; of those, just 336 were consent searches, he notes. "Consent searches are something we're always keeping an eye on," he said. Another 584 searches of blacks were noted in the APD racial profiling report as "consent status unknown," a category applied when police failed to record the reason for the stop or where that response was unreadable – how many of those additional searches were based on consent is unknown, but that number could have an impact on whether there is a larger or potentially more concerning disparity in searches.

Acevedo said he believes that in order to get a better picture of where, when, and why searches are being conducted, other factors must be added into the equation, such as the geographic distribution of searches that result from stops. "It's hard to draw any conclusions when you mix all searches into one pile," he says, and Frasier agrees. She says roughly 15% of complaints to the Office of the Police Monitor involve searches, but a hard number is difficult to ascertain because of the way complaints are categorized by police investigators.

Frasier says that determining why blacks appear to be subject to more stops than are whites is something she hopes will come with further inquiry – and like Acevedo, she says the way to start is by looking at stops and searches against city geography, as it is distributed into nine police area-commands. Frasier notes that, given the various hit rates the department has recorded, roughly 70% of all searches result in nothing being found; delving further into the data would help place each piece of the puzzle into a better context for both police and the public. "It looks out of whack, but [we need] to apply different data [to the mix] so that we can drill down even deeper," says Frasier. "I want to see the dialogue happen where people all look at these things and say, 'Why would this be?'"

Posted here is the 2010 report of the Office of the Police Monitor, with some sections highlighted by Jordan Smith for particular attention.

More Office of the Police Monitor