Point Austin: The Quality of Mercy

If you're looking for compassion, you've come to the wrong place

One of the few bright spots in an otherwise dismal 82nd legislative session was the creation of Save Texas Schools, the Austin-engendered statewide coalition of Texans opposed to the Lege's wholesale slashing of funds for public education. At least in the short term, the STS efforts were not visibly successful. Not only did the GOP-dominated Legislature refuse to back off from its determination to balance the budget only by slashing education and social services, it reversed a brief decision to earmark future increases in the Rainy Day Fund for public schools, thereby declaring the triumph of ideology over reason.

All in all, it was a bitter session for Save Texas Schools supporters, although they did organize the most successful Capitol rally in recent memory, bringing more than 13,000 people from all over the state to Austin, and in that process developing contacts for grassroots activists all across Texas. Now STS is officially maintaining the momentum; last weekend, the group sponsored forums and workshops in Austin, where it trained 125 local members to go back to their communities and carry on the fight.

"We were taken by surprise," said organizer Allen Weeks. "Now we're no longer surprised." Weeks said that the purpose of the organizing going forward is to "make education the number one issue" for the next election cycle. The group is nonpartisan, he said, and its members will support those candidates of any party who promise to support public schools.

"Eighty percent of Texans [polled] said they didn't want to cut education," Weeks said, "and I don't think anyone who went to the polls last fall thought they were voting to cut education." He said there will be ongoing organizing by local committees, and in September and October, STS events are planned for San Antonio, Dallas, and Houston. "We will support those who support quality education for all Texas children."

On another front, by the time you read this, it is virtually certain that Mark Stroman will have been executed by the state of Texas as scheduled, Wed­nes­day evening, July 20. In September 2001, Stroman murdered two people in Dallas, and tried to murder another, essentially because they looked "foreign" to him; enraged by the 9/11 attacks, Stroman went hunting "Arabs," although the men he attacked, two of them U.S. citizens, were in fact originally from Pakistan, India, and Bangladesh. Stro­man's criminal record and prison writings portray both a thug and a racist, although in recent years he has expressed remorse.

That change is in no small part due to the influence of his surviving victim, Rais Bhuiyan, whom Stroman shot in the face after asking, "Where are you from?" and not bothering to wait for an answer. Although partially blinded, Bhuiyan survived and has since made a personal crusade of saving his attacker's life. "My religion teaches me that forgiveness is always better than vengeance," Bhuiyan told the London Independent, rejecting the caricature of Islam that his attacker knew and crediting his family with teaching him the importance of love against hate.

Last week, Bhuiyan sued Gov. Perry under the Texas Crime Victim's Bill of Rights, which, according to the summary posted on the Travis County website, specifically guarantees access to "victim-offender mediation coordinated by the Texas Department of Criminal Justice." Bhuiyan says he was never even informed of those rights, and he wants to meet Stroman and personally offer him forgiveness. Moreover, he and family members of the other victims have spoken out against executing Stroman, saying they reject vengeance and want to end the circle of violence.

As is customary in Texas, their pleas for clemency have fallen on deaf ears, the state officials and the courts have rejected all appeals, and it is highly unlikely the court will respond favorably to Bhuiyan's latest claim. In the context of capital punishment, "victims' rights" is simply a political term, allowed to mean only one thing: the right to vengeance. Bhuiyan asked the Independent's Jerome Taylor: "Why do they even bother to keep the word clemency in the justice system if every time it is ignored? What is the point of having this word if it doesn't exist?"

Those would be good questions to ask presidential candidate Rick Perry, should he finally heed the "call" – as he put it to reporters – of God or Anita or his money men, that he is indeed ready to take on Mitt Romney and Michele Bachmann. But Bhuiyan is unlikely to get a satisfactory answer from the governor himself, for the Texas "clemency" process is indeed a sham designed to enable the governor to hide behind the Board of Pardons and Paroles while still taking credit on the campaign trail for being "tough on crime."

Right now, Perry, finely attuned to the tenor of the GOP primary electorate, is making much of his own religiosity, leading up to his prayerful Aug. 6 "Response" in Hous­ton, a public exercise in pharisaical sanctimony. Executions (other than of an itinerant preacher on the cross) will not come up. If he were listening, Perry might learn something from Bhuiyan, who told the Houston Chronicle's Patricia Kilday Hart, "All of the religions teach compassion, forgiveness, healing and tolerance," and cited the New Testament: "Blessed are the merciful, for they shall obtain mercy."

Leave it to a Muslim to invoke the Sermon on the Mount. Mercy is not much on our political agenda these days, whether the subject is public education or public expiation. Texans are thoroughly familiar with merciless government and have grown accustomed to the sort of reflexive ruthlessness that men like Perry represent in our public life. Indeed, it's become the order of the day – in the midst of a grinding recession and with millions of people out of work, our state and national leaders are wrestling with the vexing questions of how many more employees to cut from public payrolls and how little to spend on stimulating more hiring.

How fitting that Gov. Perry, whose lifelong principle of governance has been to do as little as necessary while taking as much credit as possible, is about to enter the national drama, stage right. 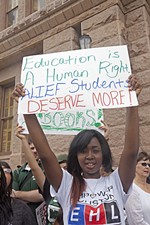