New rules could pressure Austin to clean up its act 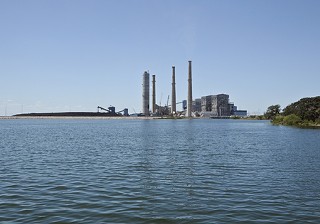 Enviros want the city to push for closure of the Fayette Power Project. (Courtesy of LCRA)

Dark clouds are looming over Austin – clouds of smog.

On July 29, the U.S. Environmental Pro­tec­tion Agency is expected to announce new rules for acceptable levels of ground-level ozone, and the change will likely put pressure on Austin to clean up its act. In 2006, the allowable standard for ozone – or more commonly, smog – was set at 75 parts per billion (down from the previous 84 ppb), and Austin has consistently flirted with violating that standard.

But that 75 ppb standard was only as high as it was because the Bush administration wasn't willing to go lower; the EPA's scientific advisers had pushed for a standard between 60 and 70 ppb, which Austin would not currently meet.

The EPA formula is based on an average of a city's fourth-highest readings for three consecutive years; the average must not top 75 ppb (rounded down). According to the Clean Air Force of Central Texas, a coalition of governmental, environmental, and business interests, Austin has had one reading of 75 this year (April 13), and our current formula average is 73. If the EPA announces new rules on July 29, a 60-day comment period will be triggered, with a final rule to be announced later this year.

Although cars are the largest overall source of ozone, the largest individual sources are Texas' coal-fired power plants. And the Lone Star Chapter of the Sierra Club has a suggestion for what the city can do about it. Since the city owns one-third of the Fayette Power Project, it should move to shut the plant down and move toward cleaner, renewable sources of energy. "Selling it doesn't help," says Flavia de la Fuente, the Sierra Club's local conservation organizer. "We'd get all of the pollution and none of the revenue. We would like to retire Fayette completely."

That goal was already stated in an energy generation plan devised by a city task force in 2010, calling for the plant to be shuttered by 2020 if "economically and technologically feasible." The plan is currently on hold while Austin Energy, the city's power company, studies its affordability.

But utility spokesman Ed Clark says a decision to shut down the power plant doesn't lie with the city. "If we decided we did not want to be a part of FPP, we could do something to make that happen, but the Lower Colorado River Authority is the owner of the rest of it and they operate it," Clark says. "We don't have a way to shut the plant down. ... The ultimate decision point on that is the LCRA."

And the LCRA won't be doing any such thing.

"Our plans are to continue to invest in that plant and continue to operate that plant as long as it provides value to our wholesale customers," says Michael McCluskey, the manager of generation resource development for LCRA. "We intend to comply with whatever new federal standards come out. I think we would look at a range of options for compliance. I don't think immediately shutting the plant would be our first option. I think we would look at retrofits and upgrades first."

McCluskey noted that LCRA is in the process of installing scrubbers on two units of the power plant, which were built in 1979 and 1980. A third unit had scrubbers installed when it was built in 1988. The LCRA says the scrubbers would reduce about 95% of sulfur-dioxide emissions.

The Clean Air Force has been working for nearly two decades to keep Austin out of "non-attainment," the legal term for failing to meet the standards. The CAF wants to avoid that designation because it would bring mandatory federal regulations down on the city.

"Gosh, I hate to even think about that because that's the thing we've been trying to avoid for many, many decades now," says Deanna Altenhoff, CAF's executive director. "Houston and Dallas have had to have much more costly restrictions put on their businesses, which then leads people to not want to locate there." Those restrictions, she said, would include more costly inspection and maintenance requirements on automobiles.

Also, federal transportation funding would be affected. "All future transportation projects would have to go through a process called 'conformity,'" Altenhoff says. "That's where they have to prove that building that road will not add to air pollution. And that creates all sorts of delays that we don't have to deal with right now. Clearly, we need more transportation, [not] less."

De la Fuente says regardless of those restrictions, the lower standard numbers are needed. "The Bush administration sat on the science for years," she says. "There are people crying foul, but we did this back in the 1990s. We ended up saving money in health costs. The 'sky is falling' prognostications haven't really come to fruition."

In a separate email, de la Fuente said: "By ensuring that polluters instead of people (in health costs, etc.) account for their externalities, the true cost of coal ends up being more than it's worth."