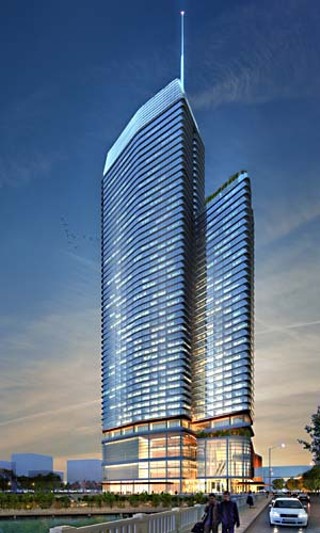 This is a rendering of a convention center hotel planned for construction at Red River and Cesar Chavez. It would have 1,035 rooms, stand 50 stories high, and include a range of sustainability features. (Illustration by Gensler)

It's no secret that Austin could use another convention hotel to meet growing demand to host bigger events – but does the city need two?

With two development groups poised to engage in a pair of massive Downtown hotel projects, the conventional wisdom is that "the market" will ultimately answer that question. The city has already provided a leg up for one of the developers, Indiana-based White Lodging Services Inc., which last week won City Council approval for $4.3 million in fee waivers. A second hotel development firm, San Diego-based Manchester Financial Group, said it would expect equal treatment from the city, and Mayor Lee Leffingwell has already signaled his support for such action.

Both companies say they have the necessary financing in place to move forward on construction within the next year.

White Lodging plans a 1,003-room Marriott Marquis hotel on the east side of Congress Avenue between Second and Third streets, the former Las Manitas site. More than $3 million of the incentives granted by council last week will waive the city's standard fees for lane closures on Third and Brazos streets; the rest will include the city's work in relocating a water/wastewater line. White Lodging's plans first emerged in 2006 but were temporarily shelved with the arrival of the economic recession.

The Manchester hotel, which will most likely operate under the Hilton name, is slated for the northeast corner of Red River and Cesar Chavez, just steps from the Austin Conven­tion Center, near the original convention Hilton; the tract currently serves as a parking lot. The $350 million project would stand 50 stories high and include 1,035 rooms. Its design, by the Austin office of Gensler architects, includes a number of sustainability features expected to garner the structure a LEED Gold designation. Manchester has signed a 99-year lease agreement with longtime Downtown landholders Perry Lorenz and Robert Knight. The property is near Palm Park and Waller Creek and is part of the tax increment financing district devised to help finance the cost of the Waller Creek Tunnel Project, which aims to turn the polluted, flood-prone waterway into a Downtown amenity.

That two experienced, well-heeled developers are ready to make the leap into new hotel projects Downtown is a good sign for Austin, Lorenz asserts. "I don't believe it's a game where the first one to stick a shovel in the ground [forces] the other one to fold."

Though Lorenz and Knight no longer control the property that they've owned for some 15 years, the two are playing an active role in getting the project off the ground. "The strength of this hotel project is that we have a national player that has on board local real estate people with strong ties to the community who understand the nature and character of Austin, the importance of Waller Creek, the importance of Palm Park and all that it symbolizes," Lorenz said. "We intend to stay totally involved, especially during the early formative stages of the project, and try and assure that they get it right."

Lorenz also hopes to get out in front of a potential Manchester embarrassment to try to avoid any public relations damage to the project. Douglas Manchester, the founder and chairman of the financial group, contributed $125,000 toward the success of Proposition 8 in California, a 2008 ballot referendum that overturned gay marriage rights. Lorenz said he had only recently learned of this campaign contribution and doesn't condone it. He also provided proof that Man­ches­ter has since issued a public apology (while still standing by his right to give money to campaigns of his choosing) and has donated money and hotel space to LGBT causes.

For at least two City Council members, Laura Morrison and Kathie Tovo, a more pressing concern is the city's willingness to subsidize, by whatever method, a private hotel project. "When we decided not to do project-based incentives like the city had with the Domain [retail center], part of the issue was that you're then subsidizing one outlet over another and picking who's going to be, in a sense, winners. And now there's already talk of this second hotel getting fee waivers," said Morrison, who last week joined Tovo in casting the dissenting votes on the White Lodging fee waivers. "It's not clear at all to me that taxpayers need to be supporting" the two hotel projects.

For Council Member Bill Spelman, the city's net gain from the White Lodging project – an estimated $25 million over 10 years – outweighs what the city is waiving in fees. "We're going to get a financial return ... which can be used for pools, which can be used for parks, more generally for libraries – all of the other things that we need done in this city. If we have more money coming in, we can spend more money. If we have less coming in, we don't."

Impulse Buying
Why Would the City Want to Own a Thirtysomething Hotel?