Which (East) Side Are You On?

Relations between the Austin Independent School District and charter school firm Southwest Key may have reached a new low on Thursday, June 16, when supporters of the nonprofit picketed a pro-district press conference at Eastside Memorial High School. After the rival photo ops, advocates on both sides are wondering if and how the two entities can ever work together for the good of the community.

AISD District 2 trustee Sam Guzmán had gathered community members at Eastside to make a public statement of support for AISD's plan to reconstitute the campus. In 2009, Eastside (formerly Johnston High) was split into two schools: Global Tech and Green Tech. With Green Tech still suffering from low test scores in some areas, the board of trustees has formally asked state Commissioner of Education Robert Scott to let the district merge the two schools and put a new emphasis on academic rigor and counseling. However, Southwest Key and its supporters, including representatives of PODER and El Concilio, have been circulating a form letter asking Scott to reject the reconstitution plan and instead hand the campus over to "an organization that has a proven educational track record and has the support of the East Austin community." Coincidentally, in February 2010, Scott approved East Austin-based Southwest Key as an approved alternative management team for Texas schools – meaning it can take over "academically unacceptable" campuses. 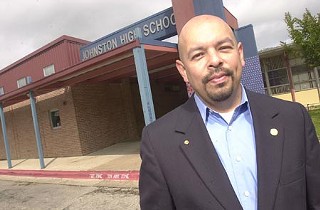 Southwest Key's current request is an evolution of the February offer it made to AISD – to lease the Eastside campus for 99 years at $1 a year. The deal was presented as an "outside of the box" proposal, but the group in reality was dusting off the same deal it's been promoting since 2007. External communi­cations manager Narissa Johnson said that proposal was squashed on June 6, when Southwest Key received a letter from the district "stating that the school is not up for lease." The nonprofit's consequent strategy is to intervene directly at the state level by lobbying Scott to reject AISD's plan.

Demonstration organizer Paul Saldaña (who has worked for both Southwest Key and AISD as an external public relations and community outreach consultant) said the June 16 demonstration was simply an expression of community support for the nonprofit. Guzmán, by contrast, called it a "stunt" disrespectful to the community members – including parents, students, and representatives of the Johnston/Eastside Memorial High Schools' Ex-Students' Association and the Eastside Memorial Veterans Monument Committee – there to support the district's plan. Guzmán angrily rejects Southwest Key's persistent emphasis on the campus' problems rather than its achievements. "It's being portrayed as a miserable, miserable high school that does miserably by the children who go there," he said. "That's not the case."

The former Johnston campus has a long record of being ground zero for conflicts over who speaks for "the community." In 2001, when the campus' Liberal Arts Academy was moved to LBJ High, some parents were elated that the magnet program was no longer swallowing up all the top 10% college places, while others attacked the loss of another academic opportunity from their neighborhood. This new fight is another chapter in the tense relationship between AISD and the nonprofit. Last year, the two entities submitted separate applications for federal Promise Neighborhoods grants after Southwest Key walked away from initial negotiations to work together (see "Promises, Promises," Aug. 6, 2010). Guzmán criticized the idea that Southwest Key – which has been running its East Austin College Prep middle school for only two years – would be able to run a full high school like Eastside. While the AISD board supports the idea of in-district charters and voted on June 20 to start discussions with IDEA Public Schools to set one up, it has no intention of handing a campus over to an outside body. If trustees were to bring in an external group, Guzmán said, "We would be looking at someone with a track record."

The merits of any proposals are undoubtedly clouded by complex East Austin neighborhood politics. For example, both sides point to support from the League of United Latin American Citizens. LULAC District 12 Director Gavino Fernandez Jr. was one of the signatories on a letter to Scott asking him to reject the AISD request. However, LULAC District 7 Director Cynthia Valadez-Mata Jr. has publicly opposed the idea of handing Eastside over to Southwest Key. There may also be a personal element that needs fixing. Saldaña called Guzmán his mentor but accused him of "playing the race card" after the trustee opined that Superin­ten­dent Meria Carstarphen is facing opposition to her proposals, just as President Barack Obama is hamstrung by critics "in a lot of instances because he is African-American." Similarly, Guzmán noted that it was his old friend leading the disruptive chants of "quality education" during the June 16 speeches.

In the wake of the demonstration, South­west Key is continuing its call for Eastside to be closed and handed over to the nonprofit, but Saldaña has somewhat softened his tone. Since the district is committed to reconstitution, he argued, both parties should work toward a compromise: Let the district get on with running the school, and South­west Key can concentrate on providing the wraparound social services in the community. Saldaña said, "Hopefully, this is an awakening with both sides." 'Fighting For, Not Against' Eastside
Now the turnaround work begins on troubled campus